Trump exults in GM’s closing of plant in Gunsan

Trump exults in GM’s closing of plant in Gunsan 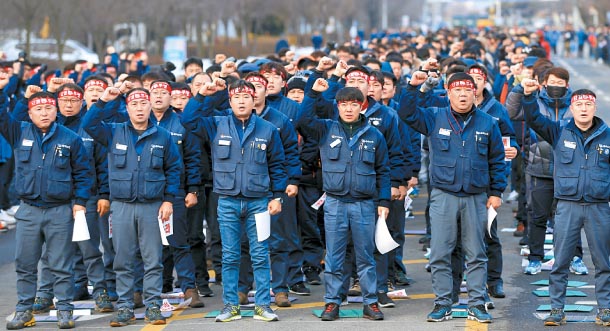 U.S. President Donald J. Trump praised GM’s decision to close down its factory in Gunsan, proclaiming that the Detroit-based automaker is coming home.

“GM Korea company announced today that it will cease production and close its Gunsan plant in May of 2018 and they’re going to move back to Detroit,” said Trump during a meeting with U.S. lawmakers at the White House on trade imbalances on Tuesday.

Trump went on to boast that bringing plants back to the United States was only possible under his leadership.

“You don’t hear these things, except for the fact that Trump became President. Believe me. You wouldn’t be hearing that. So they’re moving back from Korea to Detroit. They’re moving,” he said.

Citing Chrysler shutting a plant in Mexico, Trump claimed that many other companies are returning to benefit from his administration’s tax cuts.

“They all want to be where the action is,” Trump said.

He also claimed that one of the reasons GM was pulling out of Korea was the “bad” trade deal between the U.S. and Korea.

“We’re going to either negotiate a fair deal or terminate the deal,” Trump said.

Trump’s comment came a day after he threatened to impose reciprocal taxes on trading partners, claiming that countries like Korea, China and Japan have been getting away with “murder” for 25 years.

While Trump seems to believe that the closing of factories overseas will results in more jobs for American workers, GM Korea said the closing of the Gunsan plant does not mean relocating the lines back to the U.S.

“There is no reason to shift the Chevrolet assembly line to the U.S. when a factory there in Ohio is already operating at a fair rate in accordance to the demand,” said a GM Korea official. “What to do with the Gunsan plant and its facility is not decided.”

What is certain is that the local economy in Gunsan, North Jeolla, is expected to suffer if the plant actually shuts down in May.

The Gunsan plant has been employing some 2,000 regular and contract workers.

The number of workers associated with some 136 first-tier and second-tier suppliers in Gunsan numbers more than 10,000.

GM Korea started offering voluntary retirement packages to the plant’s employees, which are reported to include two years’ worth of their annual salaries.

Lawmakers are calling for government support to the city to minimize the economic shock.