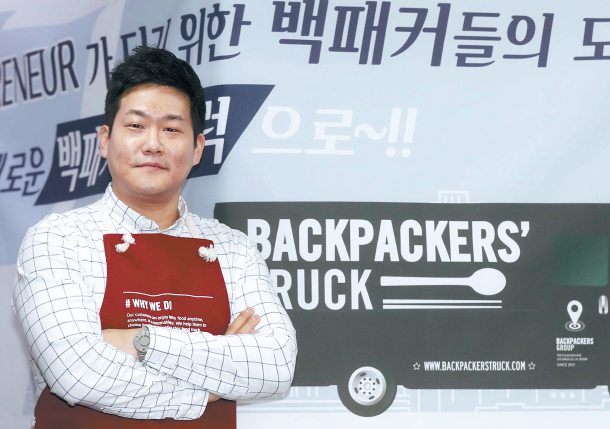 Amid the various kinds of food trucks lining the streets of Los Angeles is Backpackers’ Truck, which specializes in bibimbap, a traditional Korean rice dish topped with shredded vegetables and meat.

Kang Sang-gyun, the head of the operation, is constantly recruiting university students from Korea to join him in promoting this healthy dish to the world.

Kang, 35, has a long history of promoting Korean culture. When he was only 25, Kang travelled across the world on his motorcycle as a “Dokdo Rider” in 2006 to raise awareness about the disputed island. In 2011, he quit his job at the mobile service giant LG Telecom and started Bibimbap Backpackers with four others to promote the dish across 20 countries.

“I wanted to create an opportunity to raise awareness about our culture abroad,” Kang says, “not just traveling to rest and play.”

Bibimbap Backpackers toured with a group of 10 university students at a time, operating bibimbap food trucks together. They later cut their sphere of activity to the United States, settling in Los Angeles, where there was already a thriving Korean food scene.

“As each year passed,” Kang says, “I began to think about not just one-time promotion, but ways to permanently boost consumption of Korean cuisine.”

The group’s efforts didn’t go unnoticed. Bibimbap Backpackers received an annual funding of 200 million won ($180,000) from CJ Foodville from 2012, and was even awarded with an appreciation plaque by the U.S. Department of Health and Wellness in July 2015.

In September 2016, Kang founded Backpackers Group after completing his Social Entrepreneurship MBA program at Kaist. He wanted to create a more systematic way of promoting the dish and offering young Korean students the chance to manage these trucks while practicing their English.

Backpackers Group’s Global Business Camp runs for four to eight weeks at a time. Korean university students can apply to participate, though they are required to pay a 90,000 won ($83.70) program fee and cover their own airfare to and from Los Angeles. Each time, 10 to 12 students are selected for four days of training in Korea before flying to America to operate the trucks, cooking, cleaning and taking orders. They are usually split into teams and encouraged to compete.

“In my early 20s, I wanted to find out what I was good at and what I wanted to do,” Kang says. “I made this camp for young people who have similar concerns. I hope this can be an opportunity for them to become polished entrepreneurs by facing and solving problems while achieving their goals.”

Kang’s ultimate dream is to make a “mobile Korean market” by expanding the number of food trucks serving various Korean dishes. Kang says, “I hope that Korean dishes can reach ever more dining tables around the world.”