Choi Min-jeong bolts to the top

Choi Min-jeong bolts to the top 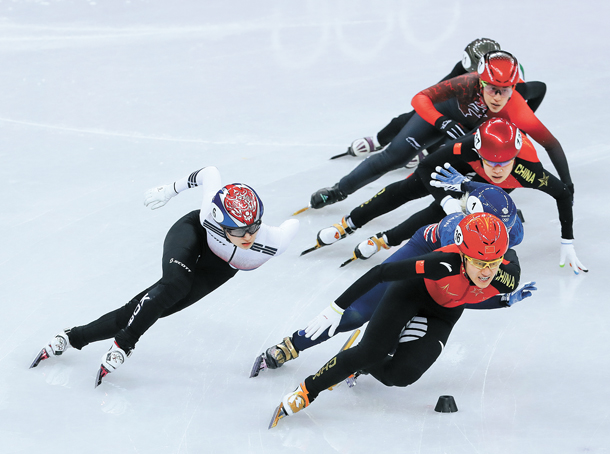 Choi Min-jeong, left, takes the outside to win the women’s 1,500-meter short-track final at Gangneung Ice Arena on Saturday. [YONHAP]

Choi clocked 2 minutes and 24.948 seconds. Having finished first in all the heat races, Choi was dominant in the final, leading by 0.755 second behind silver medalist Li Jinyu of China. Kim Boutin of Canada won bronze. Choi’s lead was dominant since the rankings of the skaters in short track come down to one hundredth of a second.

“I got very emotional when I thought about all the hard work I’ve done in the past four years,” Choi said. “I’ve been dreaming about the Olympics and now that I’ve finally won gold, it’s impossible to explain my emotions in words.”

It was a successful comeback for Choi from Tuesday’s race, when she was disqualified for impeding in the 500-meter race final.

After setting an Olympic record during the 500-meter semifinals, Choi started the final slowly, settling into third place at the start of the race before quickly passing Boutin and trying to catch up to Fontana for the rest of the race. Choi seemed to be satisfied with the silver, finishing 22 centimeters (8.66 inches) behind Fontana, although there had been hopes before the race that she may become the first-ever competitor to win gold in all four short-track events.

But her celebrations didn’t last long, as she was declared to have pushed Boutin in the final lap. Though disappointed, Choi and her coaching staff accepted the judges’ decision.

During the final race in women’s 1,500 meters Saturday, Choi seemed to be consistently aware of the penalty she received in the 500-meter race, and she barely used her left hand during the race.

“It is somewhat true,” Choi said. “But at the same time, it’s also because 1,500 meters has less speed than the 500-meter race. I tried to forget about it by telling myself that 500 meters was just a part of the process.”

Though Shim Suk-hee is a more familiar name to the Korean fans from her success at the 2014 Sochi Olympics, based on the recent statistics, Choi has been well ahead of Shim. Choi wasn’t able to compete in Sochi due to the minimum age requirement. Joining the national team right after the Sochi Games, Choi was dominant in international events, winning the overall title at the 2015 and 2016 World Championships.

Choi may not have topped all four events, but her victory gave Korea gold in the event for the first time since the 2006 Winter Games. At the 2010 Vancouver Olympics, Shim won silver in 1,500 meters.

“Right at the moment when I won the World Championship or the World Cup, I couldn’t believe it,” Choi said. “But later on, it’ll be a lot more meaningful. Right now, it still feels like a dream, but I’ll feel it more and more as the time goes.”

Choi will continue her race in the women’s 3,000-meter relay tomorrow and 1,000-meter race on Thursday.

Kim A-lang barely missed a spot on the podium, finishing fourth by clocking 2 minutes and 25.941 seconds. Though fans expected to see all three Korean short-track skaters, Shim finished earlier than others after she fell during the quarterfinal race.

Despite the 1,000-meter race being Korea’s other strength, the team had to give up their shot at sweeping the podium even before the quarterfinals race, as the three Koreans - Lim Hyo-jun, Hwang Dae-heon and Seo - were all assigned in the first group.

Seo finished at the top in the quarterfinals along with Lim. Hwang, who fell in the 1,500-meter final race, missed his spot in the semifinals by falling again right before the end of the race.

In the semifinals, Lim and Seo cruised through by finishing first in their group.

Despite having two Korean speed skaters in the finals, they failed to win either gold or silver as both fell during the race. Falling behind the race by quite a margin, Seo managed to finish third, winning bronze for Korea.

By medaling in two races, Korea has successfully redeemed itself from Sochi, where the men’s team finished without a single medal. This is the first time since Lee Jung-su, who won gold at the 2010 Vancouver Winter Olympics, that a Korean has taken a medal in the 1,000-meter race.