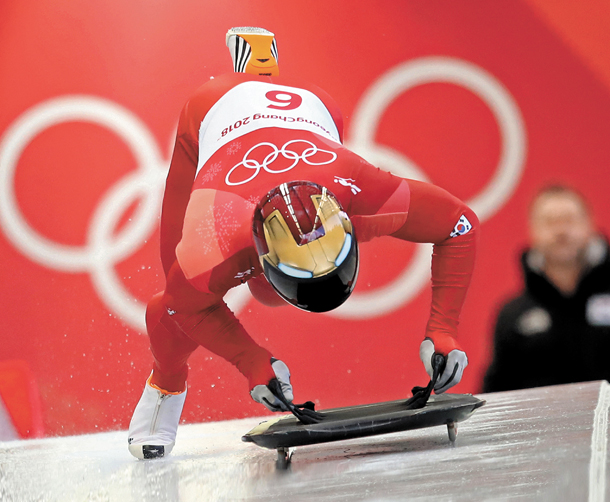 Yun Sung-bin competes in the men’s skeleton race at the Olympic Sliding Centre in Pyeongchang County, Gangwon, on Friday. [YONHAP]

Asia’s first-ever medal in a sliding event went to Yun Sung-bin on Friday, who won gold in skeleton at the Olympic Sliding Centre in Pyeongchang, Gangwon, cementing his position as the world No. 1.

In the fourth and final run, Yun was the last on the track, setting a new track record, his third in two days, of 50.02 seconds to secure his first Olympic gold.

“It was a satisfactory result,” Yun said. “Winning gold at the Olympics was also my personal goal. I’m glad I got off to a head start in skeleton.” 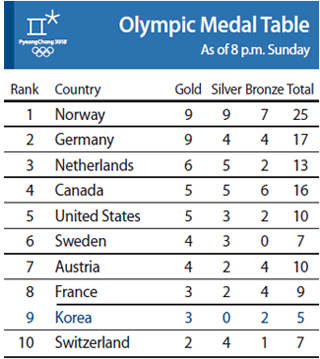 Yun’s chances of winning gold were already strong as he had broken two world records in the first two heats of the men’s skeleton race.

In his eyes, Martins Dukurs of Latvia, who was No. 1 for eight consecutive seasons, was his only real rival.

Not only did he set a new track record, he also set a new start record - 4.61 seconds.

Racing first in the third run, Yun recorded a time of 50.18 seconds, sufficient to extend his lead by more than one second ahead of Dukurs.

His numbers set him up as the favorite for gold medal at the final.

“In the fourth run, I tried to have the same mindset I had in the first,” Yun said. “I think this led to good results in all four runs.”

Yun finished with a combined time of 3 minutes and 20.55 seconds, 1.63 seconds ahead of Nikita Tregubov of the Olympic Athletes from Russia in the final run. Tregubov successfully won silver while Dom Parsons of Great Britain took bronze.

“I had no reason to feel the pressure,” Yun said. “The Olympics are hosted here, at a track where it’s like my home, so I didn’t feel any pressure.”

Dukurs, who started the final run in second, dropped to fourth with a combined time of 3 minutes and 22.31 seconds.

Yun’s 1.63-second margin ahead of Tregubov is the biggest margin of victory recorded at the Olympics since skeleton was reintroduced in 2002.

But it wasn’t an easy start for Yun.

Almost giving up in the beginning, Yun finished 16th at the 2014 Sochi Olympics, two years into his skeleton career.

Unable to medal, he was disappointed with himself and worked even harder to succeed at PyeongChang.

But Yun wasn’t the only Korean who broke a personal best at PyeongChang.

Kim Ji-soo, the other Korean racer, broke his personal best clocking 50.51 seconds at the final run. Kim was seen as a bronze medal contender, but Korea’s hope quickly faded as he settled for sixth.