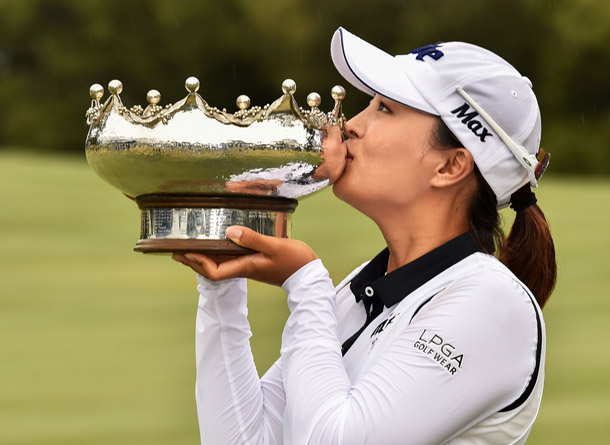 Ko Jin-young had a wire-to-wire victory at the ISPS Handa Women’s Australian Open at Kooyonga Golf Club on Sunday.

Shooting a final round of three under par, 69, Ko finished the tournament three shots ahead of runner-up Choi Hye-jin. With the victory, Ko became the first golfer on the LPGA Tour in 67 years, since Beverly Hanson of the United States, to win in her debut as a full-time member.

Ko earned her LPGA Tour card by winning the LPGA KEB Hana Bank Championship in Korea last October, and even before her debut, she was considered the most likely golfer to win the Rookie of the Year award, based on her success on the KLPGA Tour. Prior to her LPGA Tour debut, Ko made her KLPGA debut in 2014 and has nine career victories on the domestic tour.

But the victory in her debut stage is more impressive, as it’s a badge of honor even Pak Se-ri and Park Sung-hyun haven’t earned.

“I finished yesterday with a 4-stroke lead,” Ko was quoted as saying on the LPGA website. “But my friend said to me, ‘if you [have] a 10-stroke lead, you’ll have the same feeling, so don’t be nervous and just relax. Tomorrow is tomorrow.’”

Having spent her time training in New Zealand during the offseason, Ko had been focusing on the Australian Open. Since her caddie, Dean Herden, is Australian, he knew better than anyone about Kooyonga Golf Club. With his help, she dominated the field from the first round, taking sole lead at seven under par.

Then, after rounds of 69 and 71, Ko started the final round with a four-shot lead. By starting her rounds with birdies on her first two holes, Ko extended her lead by six, but bogeys on the third and the seventh holes forced her to drop back to 11 under par.

This allowed Choi to get one shot behind Ko after the first nine. Choi did this by shooting four under in the first nine, but Ko responded in the back nine, shooting two under par.

By making a birdie putt on the par-4 13th, about six meters (19.7 feet) long, Ko extended her lead by three. Then, with another birdie on the 17th, Ko once again maintained her lead to secure her victory.

Ko became the first Korean golfer to win on the LPGA Tour this season and has won a prize of $195,000. In addition, she now has the lead in the Louise Suggs Rolex Rookie of the Year race. In the past three seasons, the award winners have all been Korean.

Choi, playing her first season as a full-time professional on the KLPGA Tour, left quite an impression by shooting a bogey-free round of five under par to finish the tournament at 11 under par. Last season, Choi finished seventh at the tournament playing as an amateur.

Ryu So-yeon, Shin Ji-yai and Yoo Sun-young were among the six golfers to finish tied for seventh at six under par. Shin, who won the tournament in 2013, lost her chance to defend the title with a double bogey on par-4 eighth.