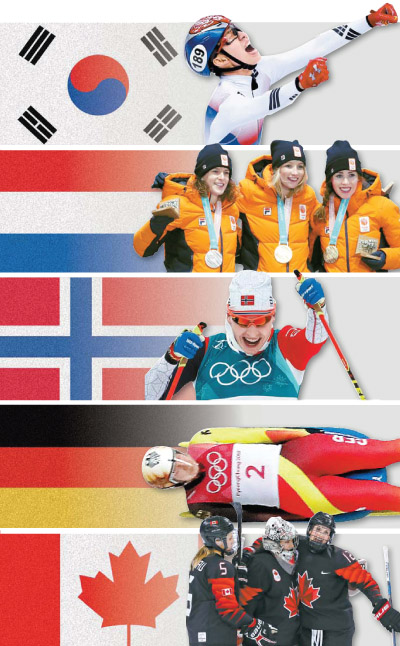 From top: Korea dominates in short track with 23 gold medals, the Netherlands with 41 gold in speed skating, Norway with 40 gold in cross-country skiing, Germany with 18 gold in luge and Canada with 13 gold in ice hockey. [JOONGANG PHOTO]

At the Winter Olympics, it is apparent that certain nations have come to dominate certain sports.

The Netherlands have won the most gold medals at the Winter Games from speed skating. At the 2014 Sochi Olympics, 39 of their 41 gold medals were from that sport.

With seven professional speed-skating teams and more than 700 speed-skating clubs throughout the nation, about 150,000 people out of the nation’s 17 million register to become speed skaters.

Perhaps the country dominates speed skating because unlike many other nations, speed skating is not considered a niche sport there, but a professional sport in which the 7,000 junior members of the skating union are channeled into speed skating, rather than other ice sports such as figure skating and short track.

As the Netherlands is the world’s speed skating powerhouse, Korea is known to dominate short-track speed skating. Before PyeongChang, Korea won a total of 26 gold medals in the Winter Olympics, with 21 coming from short track. At the 2018 Games, Korea added two more gold medals to the short-track list.

Short track officially became a part of the Olympic program at the 1992 Albertville Olympics, after having been a demonstration sport at the 1988 Calgary Winter Games. Korea won its first two gold medals in short track at the men’s 1,500- and 5,000-meter events at the 1992 Games.

As the two Korean short trackers rose to the podium in Albertville, they sparked interest in the sport back home.

But the country with the most gold medals at the Winter Olympics is Norway with 118 gold medals total. The Scandinavian country won its first gold at the 1924 Chamonix Games in cross-country skiing. In this event alone, Norway has 42 gold medals, 41 silver and 30 bronze.

As for sliding sports, Germany has historically come in strong, especially at luge. Germany won 31 gold medals in luge and 17 in bobsled during the course of its Winter Games history.

But Germany still struggles to win gold in skeleton, while the United States, Great Britain and Canada have won gold in the sport, with Korea’s Yun Sung-bin bringing a historic win on Friday. Canada also has the most number of medals for ice hockey - 13 gold, five silver and two bronze.

As for figure skating, Russia has won the most gold in Olympic history, with 24 gold medals. In the past, Russia focused on pairs figure skating and ice dancing, but has recently done well also in men’s and ladies singles events. At PyeongChang, the ice dance pair Ekaterina Bobrova and Dmitri Soloviev won silver for the free dance team event on Feb. 12, dancing as Olympic Athletes from Russia (OAR).

But northeastern Asian countries, including Korea and Japan, have also produced some world-star figure skaters. After Japan’s Midori Ito, the first to land a triple axel jump, won silver at the 1992 Winter Games, Asia saw a rising interest in figure skating. Then there was Japan’s Mao Asada, Korea’s Kim Yuna, who dazzled the skating world and won gold at the 2010 Vancouver Winter Olympics, and Japan’s Yuzuru Hanyu, who won his second Olympic title this year and is widely regarded as the greatest male figure skater ever.