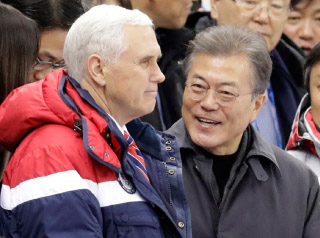 As a sign of pressure on North Korea, U.S. Vice President Mike Pence avoided any eye contact with the North Korean delegates. The United States may feel displeased that Pyongyang was using the PyeongChang Winter Olympics as a propaganda stage to earn time to weaken sanctions and complete its nuclear program. On North Korea’s proposal for an inter-Korean summit meeting, the White House also stated that improvement in inter-Korean relations cannot be separate from denuclearization.

The false alert in Hawaii about a missile attack on Jan. 13 shows how Americans feel a substantial threat from North Korea’s nuclear weapons. The Trump administration cannot last if it cannot ward off North Korea, a terrorism-sponsoring state, which threatens to attack the continental United States and bring it to ruin. But such a task is beyond President Donald Trump and the Republican Party. The 2018 Nuclear Posture Review of the United States, published on Feb. 2, discusses customized strategies to shut down North Korea’s nuclear program and end the Kim Jong-un regime.

For the past 25 years, governments in South Korea, the United States and China have been “passing the bomb.” As the end is near, however, the bomb cannot be tossed to another country anymore. As North Korea is close to completing nuclear missiles that can attack the continental United States, Washington cannot rule out a military option. Moreover, the United States may be disappointed that South Korea let down its guard as an ally.

The relationship between China and North Korea, often said to be as close as lips and teeth, is also shaky. As the confrontation between America and China escalates worldwide, the United States is pressuring China, demanding cooperation on the North Korean nuclear issue. As North Korea’s nuclear possession could lead to the nuclear armaments of South Korea, Japan and Taiwan, China cannot condone North Korea’s nuclear program. So the Xi Jinping government might also hope to replace the Kim Jong-un regime.

What will happen after the PyeongChang Winter Olympics’ peaceful mood ends? The United States will likely soon announce its strongest and most aggressive economic sanctions. At the foreign ministers’ meeting attended by 20 countries in January, a sea blockade was discussed. As the United States stated, strong sanctions could be announced, the temporarily postponed Korea-U.S. joint military exercises would begin, and sea interdiction, if not a blockade, could be imposed. North Korea will protest. It will prepare a test launch of inter-continental ballistic missiles, and the United States will immediately detect it.

Victor Cha’s designation as U.S. Ambassador to Korea was withdrawn not just because he opposed a “bloody nose” operation. Washington must have cancelled the nomination because they thought Cha could not fulfill the position representing U.S. interests. Regardless of the plausibility of actual attacks, maximum pressure would not work if the U.S. Ambassador to Korea and the Korean president say a war could not happen. Then the United States would be left with the actual means of attack, not pressure.

South Korea cannot live with a nuclear presence in the North. Peace will come when you are resolved for war. Maximum pressure on North Korea means peace.

*The author, a former ambassador to Belarus, is a professor at Catholic Kwandong University.