The frame of Kim’s masks

The frame of Kim’s masks 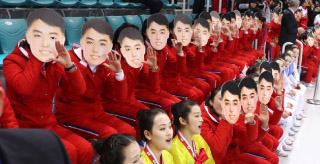 “I want you to raise your hand if you believe English should be the official language of the United States,” a CNN anchor asked the candidates for the Democratic presidential nomination debate in June 2007. Unlike popular belief, English is not the official language of the United States, due to the belief that having an official language could be discriminatory against immigrants. Instead of expressing whether he was for or against the argument, Barack Obama said, “Everybody is going to learn to speak English if they live in this country. The issue is not whether or not future generations of immigrants are going to learn English. The question is, how can we come up with a both legal and sensible immigration policy. And when we get distracted by those kinds of questions, I think we do a disservice to the American people.”

George Lakoff, the cognitive linguist know for his belief that people are influenced by the metaphors they use to explain complex phenomena, jumped up and cheered, he wrote in his book “The Political Mind: A Cognitive Scientist’s Guide to Your Brain and its Politics.” He advises, “The first lesson about the use of framing in politics is not to accept the other’s framing. One part of that is politely shifting the frame, as Obama did.”

But it is not so easy, I thought as I watched the the “Kim Il Sung” mask controversy.

On Feb. 10, the North Korean cheering squad used masks with a man’s face at the women’s ice hockey match played by the joint team. One media outlet falsely reported that the cheerleaders wore “Kim Il Sung masks,” and Rep. Ha Tae-Kyung, a member of the Bareun Future Party, fanned the controversy by releasing a photo of a young Kim Il Sung.

The Ministry of Reunification denied that the mask was the face of Kim Il Sung, and Pyongyang claimed Kim’s image could never be used for cheering. The media that first made the report admitted that it was false and removed the article. The Moon Jae-in administration and supporters may believe that supporters of Ilbe, an online community notorious for misogynistic and far-right content, conservative media and conservative politicians proved how easily they can be tricked and agitated.

The Ministry of Unification still used the mask frame. But the bigger frame is whether North Koreans are the same people. Hankook Research’s Jeong Han-Wool said in the 1990s that 90 percent of those polled see North Koreans as Korean, but last year, it was 70 percent. The administration may find this frame awkward, but it’s a frame that offers insights into how many young people view North Korea.