MWC will be coming-out party for 5G tech

MWC will be coming-out party for 5G tech 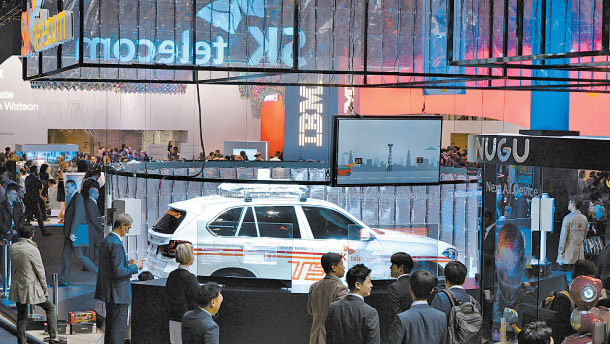 A virtual image of SK Telecom’s booth, to be devoted to 5G under the theme “Perfect 5G” at the Mobile World Congress, which is scheduled to kick off on Feb. 26 in Barcelona. The company’s 5G-based self-driving car, which successfully completed a trial earlier this month, will also be on display. [SK TELECOM]

The upcoming Mobile World Congress in Barcelona is set to be a major showcase for 5G technology as some countries prepare to commercialize super-fast connectivity by early next year.

The annual trade show run by the Global System for Mobile Communications, better known as GSMA, will have the theme, “Creating a Better Future” - a nod to the future of mobile communications and related technologies. As it kicks off on Feb. 26, around 2,300 companies from 208 countries in information and communications technology are slated to gather.

This year is particularly noteworthy for telecoms since the 3GPP wireless standardization body confirms by June the international standards for 5G networks, which promise more than 20 times the data transmission speed of current 4G LTE networks.

All of the three Korean mobile operators - SK Telecom, KT and LG U+ - have been trying to take the lead in deploying next-generation networks and also having their 5G technologies named international standards.

A computer-generated image of KT’s booth at the MWC, which will mostly showcase 5G-related technologies. [KT]

No. 1 player SK Telecom is setting up a standalone booth devoted to 5G under the theme “Perfect 5G” at Exhibition Hall No. 3, where tech heavyweights Samsung Electronics, LG Electronics, Nokia and Qualcomm plan to set up their own booths.

Visitors will get a glimpse of the future of AI through the company’s “hologram AI.”

The company’s 5G-based self-driving car, which successfully completed a trial earlier this month, will also be on display.

KT, Korea’s second-largest mobile operator, will be focusing on showing how 5G can transform real-life situations. A tablet enabling 5G connectivity it has jointly developed with Samsung Electronics will show how fast the next-generation network is going to be by letting visitors compare it with a 4G-based tablet at KT’s booth. Video images shot by multiple drones will be broadcast at the booth in real time on the 5G network, demonstrating the bullet-fast data transmission speed and extra-low latency. Visitors will also be able to play 5G-based virtual reality games.

Even though LG U+, the smallest player, will not have its own booth at the MWC, its CEO and Chairman Kwon Young-soo is scheduled to pay a visit and meet with business figures. Top executives from other global telecom companies such as China Mobile, Ericsson, NTT Docomo and Vodafone are slated to deliver speeches at the show, although none from Korea will do so.

Aside from telecom services, Samsung Electronics has made public its intention to unveil the Galaxy S9 in a so-called unpacked event on Feb. 25, a day before the launch of the fair. LG Electronics is scheduled to debut a revamped version of its V30 smartphone, which has added an intelligent personal assistant and image recognition, on Feb. 26.