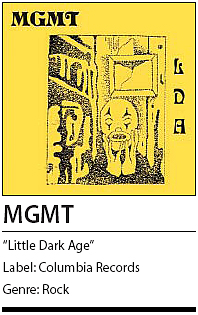 If MGMT’s first album in four years gets really trippy, there’s a good reason. One song was apparently created during a real acid trip.

If that’s what it takes to get the creative juices flowing for bandmates Andrew VanWyngarden and Ben Goldwasser, we’re fine with it. MGMT have once more delivered an off-kilter, challenging and very addictive album with “Little Dark Age.”

The 10-track collection veers from cheeky (“She Works Out Too Much”) to pitch-black (“When You Die”). There a general sense of unease in the lyrics, both socially and technologically, and the cover riffs off Edvard Munch’s unnerving “The Scream.”

MGMT have some producing help this time from Chairlift’s Patrick Wimberly and their longtime collaborator Dave Fridmann, whose work with the psychedelic Flaming Lips really rubs off here.

The title track is the most likely to get mainstream traction, with its heavy synth waves that have a Kraftwerk feel and a video in which VanWyngarden does his best imitation of Robert Smith from The Cure. “I grieve in stereo,” he sings.