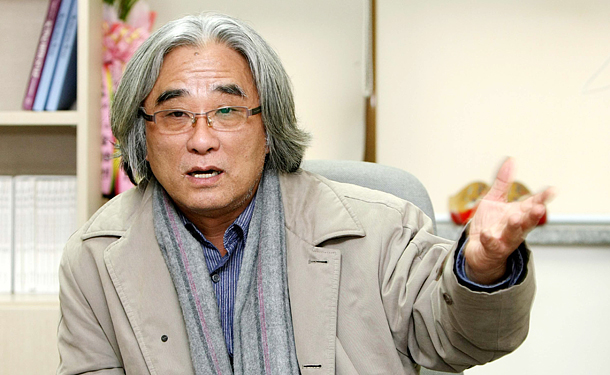 Renowned playwright and producer Lee Youn-taek, 66 years old, stepped down from his position as director of the Street Theatre Troupe after accusations of sexual misconduct arose earlier this week. [JOONGANG ILBO]

As the Me Too movement has an impact on Korean society, with more women coming forward with their own tales of being victims of sexual misconduct, a series of accusations against renowned writer, producer and theatrical director Lee Youn-taek has shocked the cultural world.

On Feb. 13, a local newspaper reported that Lee, director of the Street Theatre Troupe since 1986 (STT), had sexually assaulted an unnamed female actor in 2015 while working with the National Theatre Company of Korea. Allegedly, the national company decided not to work with Lee anymore without taking other legal measures.

The next day, Kim Su-hee, leader of the Miin theatre group, posted on Facebook an account of a disgraceful night with Lee 10 years ago. The post began with #MeToo.

When Kim was on tour performing in Lee’s famous play “Ogu: Method of Death” (1989), she got a call from Lee one night when she was in a hotel room with fellow actors. “Ogu” was the play that helped make Lee famous in Korean theatre. It was made into a movie in 2003.

According to Kim, she was a senior member of the production and a lot of other colleagues had left the group because of its demanding workload.

“I instantly knew why he called - to [ask me to] give him a massage,” wrote Kim.

Apparently, Lee had asked other female actors to give him massages before to “cheer him up.”

“He made me give him a massage as I expected,” she wrote on Facebook. “After a few moments, he unzipped his pants. And then he put my hand near his genitals and told me to rub around his genitals. He took my hand and groped around his genitals inside his underwear. I pulled my hand out. And I told him, ‘I can’t do this anymore.’ That was the first thing I said after I entered the room.”

She finished the tour and worked with the crew on two more occasions, then quit STT. “I have been running away from him ever since then. It made me sick every time he came forward and said something as a senior of the theatre world, but there was nothing I could do about it except for turn away from it.”

Kim’s post went viral on the internet. She posted it, she wrote, out of “outrage that Lee’s loutish ways had not changed over the years and nothing was being done about it.”

Immediately after Kim’s account spread, Lee resigned from all his positions. STT posted a letter of apology on its official Facebook account on Thursday, but was criticized by the public because the apology was not given by Lee himself, and it did not contain any confirmation of his wrongdoing.

The Korean Playwrights Association on Saturday expelled Lee. “We will not turn our eyes away from the current matter just because of the social atmosphere, or because of his achievements in the field,” said the association. “The #MeToo movement in the theatre world is not a matter of the individual, but the field itself, and we will not keep our silence on the brutalities that harm the theatrical spirit.”

As of Sunday, Lee had stepped down as director of the STT, a member of the board of Miryang Theatre village and art director of 30Studio. He also cancelled all his upcoming plays.

And Me Too accusations continue. Actor Lee Myung-haeng dropped out of his ongoing play on Feb. 10 after a member of one production crew revealed she was sexually harassed by the actor. Poet Ko Un, a prominent figure in the literary world, revealed Sunday that he will vacate a residence sponsored by the Suwon city government due to a recent accusation by poet Choi Young-mi.

Meanwhile, Lee will give a formal apology to the public on Monday morning in 30Studio in Jongno District, central Seoul.