Hwang Pyong-so comes back from being purged

Hwang Pyong-so comes back from being purged 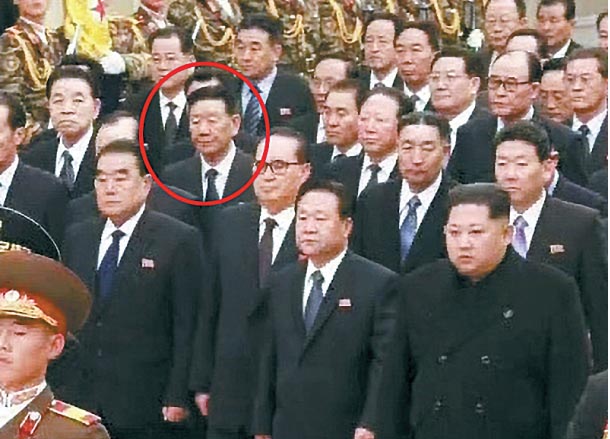 Hwang Pyong-so, circled in the photo above, reemerged in the North Korean media last week after a four-month disappearence. Hwang, former director of the North Korean Army’s General Political Bureau, was suspected by South Korean intelligence officials to have been fired from his post for holding “impure attitudes” toward leader Kim Jong-un. His current position wasn’t mentioned by Pyongyang. [YONHAP]

Hwang Pyong-so, former director of the North Korean Army’s General Political Bureau, whom South Korea’s spy agency believed was fired from his post for “impure attitudes” toward leader Kim Jong-un, reemerged in North Korean media last week attending state events with other officials, fanning speculation he is back in the power circle, though with a lower rank.

Hwang disappeared from North Korean media in mid-October, with no official announcement about his fate. But last Thursday evening, he was shown in a segment on Korean Central Television (KCTV) attending a ceremony that marked the 76th birthday of former leader Kim Jong-il, which fell last Friday.

On Friday, the broadcaster showed a delegation led by Kim Jong-un visiting the Kumsusan Palace of the Sun, a mausoleum in Pyongyang to former leaders Kim Jong-il and Kim Il Sung. Hwang was in it.

North Korean media did not identify Hwang’s rank, but a South Korean government official said it appeared he was demoted to the level of vice director within the Workers’ Party.

It was certain he was reinstated to an important post within the regime, said the local official, because Hwang was standing next to Kim Kyong-ok, first vice director of the Organization and Guidance Department within the Central Committee of the Workers’ Party at the Friday event, and Jon Il-chun, head of Office No. 39, an agency within the party that oversees the leader’s personal funds, at the Thursday event.

The fate of Hwang had been a mystery for months, after South Korea’s National Intelligence Service (NIS) said last October that he and his deputy at the North Korean Army’s General Political Bureau, Kim Won-hong, were disciplined during a probe led by Choe Ryong-hae, vice chairman of the Central Committee of the Workers’ Party, for holding “impure attitudes” toward Kim Jong-un.

Local officials said at that time that Kim Jong-un was trying to crack down on overly powerful organs, a tactic traced back to 2013, when the young leader executed his own uncle and political mentor, Jang Song-thaek, by having the State Security Ministry interrogate him and find him guilty of trying to overthrow the government.

During a briefing at the National Assembly earlier this month, the NIS said Hwang was undergoing ideological re-education, while Kim Won-hong, who held several posts within the Workers’ Party, was expelled from it, which, in the North Korean regime, spells the end of a political career.

Kim Jong-gak, former defense minister, has been tapped to replace Hwang, according to the NIS. Kim Won-hong’s successor was not mentioned.

Kim Jong-gak, who had not been seen with Kim Jong-un since December 2014, was featured on KCTV on Feb. 9 flanking the leader during a military parade at Kim Il Sung Square to celebrate the North Korean Army’s 70th founding day.

South Korean authorities also believe that Ri Man-gon, former head of the Machine-Building Industry Department within the Workers’ Party, has been demoted from being a member of the party’s Politburo to an alternate member.

Ri’s former post at the machine department is suspected to have been given to Thae Jong-so.