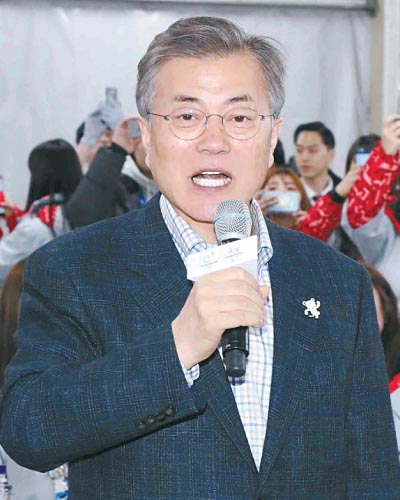 President Moon Jae-in gives a pep talk to volunteers at the Olympic Games in Gangneung, Gangwon, on Saturday. [YONHAP]

President Moon Jae-in said Saturday it is premature to talk about an inter-Korean summit, making clear that Washington and Pyongyang have to get closer to talking before that can take place.

“Anticipations are high, but I think it is too impetuous,” Moon said when a reporter asked if he will hold a summit with North Korean leader Kim Jong-un. “It’s like the old Korean saying that you are looking for hot water from a well.”

Kim sent his younger sister Kim Yo-jong to South Korea as a special envoy and she delivered an invitation to Moon on Feb. 10 to visit Pyongyang. Moon has yet to formally accept. Moon told his North Korean visitor: “Let’s create the environment for that to be able to happen.”

During a meeting with reporters from around the world on Saturday, Moon elaborated further on prospects for inter-Korean relations. He made remarks during a visit to the main press center of the Winter Olympic Games in Pyeongchang County, Gangwon.

Moon said he is satisfied that various goals he set for the Olympics are being achieved. “One of the most important goals was prompting peace through the PyeongChang Olympics,” he said. “North Korea’s participation successfully eased tensions on the peninsula and the inter-Korean team and joint cheerleading impressed the world.

“Because inter-Korean talks made significant accomplishments, I have expectations for more improvement,” Moon said.

After the high-level delegation from the North returned to Pyongyang on Feb. 11, Moon has been tight-lipped about North Korean issues, including the proposal of an inter-Korean summit. Speculation grew that Seoul would send a special envoy to Pyongyang.

Moon’s attempt to arrange a meeting between chief delegates of the United States and North Korea on the sidelines of the Olympics’ opening ceremony failed very publicly, with U.S. Vice President Mike Pence refusing to engage with the North Korean visitors at a reception and in the viewing box of the opening ceremony. But U.S. officials are increasingly indicating their willingness to talk to the North.

A Blue House official said Sunday that the key is talks between the United States and North Korea. “Moon is not only saying it is too early to talk about an inter-Korean summit, but the proper conditions should be created,” he said. “Without progress in U.S.-North talks, it is hard for inter-Korean talks to more forward.”

“Right now, preliminary contact between the United States and the North to explore each other’s intentions is important,” he said. “The most important thing is that someone will act first and say, ‘Let’s talk,’ instead of trying to set up a meeting with a specific agenda.”

Two previous inter-Korea summits took place only after U.S.-North relations were improved. The June 2000 summit took place as the Bill Clinton administration was pushing forward a policy to normalize bilateral ties and put a nuclear freeze on the North. The October 2007 summit also came after six-party talks reached an agreement earlier that year to start a freeze of the North’s main nuclear facility in Yongbyon.