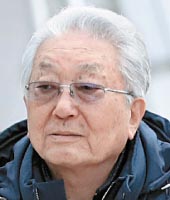 PYEONGCHANG COUNTY, Gangwon - Chang Ung, the lone North Korean member of the International Olympics Committee (IOC), returned home Sunday a week before the closing of the ongoing Winter Olympics due to health reasons.

He left the host city of the 2018 Winter Olympics in the morning and headed for Incheon International Airport, the South’s main gateway. He will likely fly to Pyongyang via Beijing.

The Winter Games will come to an end this Sunday after a 17-day run.

The 79-year-old caught a cold during a two-week stay in Pyeongchang, which has been notorious for its bitterly cold weather with storm winds.

Chang arrived in the South on Feb. 4 to attend the 132nd IOC session in the host city.

He also participated in a number of Olympic events and festivals, including the opening ceremony of the PyeongChang Winter Olympics on Feb. 9.

For Chang, the PyeongChang Games will be the last Olympics before he retires as an IOC member because of his age at the upcoming IOC session slated for October in Buenos Aires, Argentina. Chang was elected to the IOC in 1996.