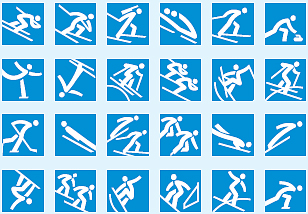 The 24 pictograms representing the 24 sports of the PyeongChang Olympics are based on hangul, the Korean alphabet. [PYEONGCHANG ORGANIZING COMMITTEE]

Traditionally, pictograms have been used to represent the host country’s culture at the Olympics, along with their logos and mascots, ever since they were first used in the 1948 London Summer Games.

For the PyeongChang Winter Olympics, the motif for Korea’s 24 pictograms is hangul, the Korean alphabet, one of the country’s most distinct cultural assets.

The aesthetic quality of their distinct shapes and lines were graphically incorporated into the pictograms in order to represent the 24 sporting competitions across the 15 disciplines of the Winter Games, which depict athletes at their finest in order to reflect the Olympic spirit.

They will be used in marketing materials and signage at the Games, offering valuable information to visitors and participants who speak different languages.

The aim of the pictograms is to share the beauty of the Korean alphabet with a global audience, giving people an opportunity to learn and understand more about Korean culture, while also providing needed information.