Silver in 500-meter is a relief for Lee Sang-hwa

Silver in 500-meter is a relief for Lee Sang-hwa 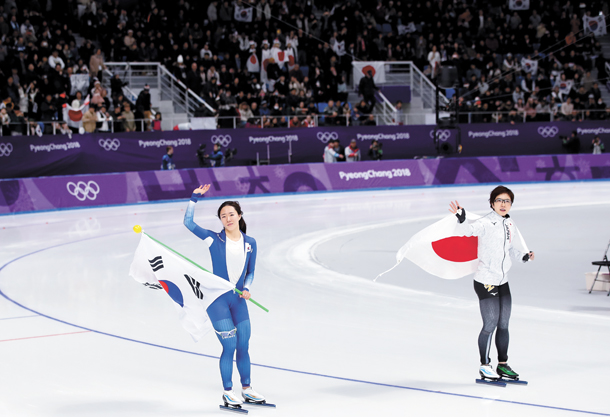 Lee Sang-hwa, left, and Nao Kodaira of Japan celebrate their medal finish after the women’s speed skating 500-meter race at the Gangneung Oval in Gangwon on Sunday. [YONHAP]

Speed skater Lee Sang-hwa may not have won her third consecutive gold at the Olympics, but she took home silver in the women’s 500-meter race at the Gangneung Oval in Gangwon on Sunday, with her time of 37.33 seconds - 0.39 of a second behind gold medalist Nao Kodaira of Japan.

Lee was paired in the 15th group along with Arisa Go of Japan. Despite the pressure of racing after Kodaira, who set an Olympic record, Lee got off to a strong start, reaching the 100-meter point in just 10.20 seconds.

However, after 150 meters, Lee started to slow down and finished her race slightly behind Kodaira. Karolina Erbanova of Czech Republic took home bronze, with a time of 37.34 seconds. While Kodaira could not beat Lee’s world record, she set a new Olympic record with her time of 36.94 seconds.

“I felt like I was fast,” Lee said. “It felt like the time I set the world record. Since I didn’t feel that for a while, I made a mistake at the end. But I don’t have any regrets.”

Once Lee completed her race, she started crying, feeling both touched by the encouragement from Koreans and relieved that the race was finally over.

“I thought, ‘It’s finally over,’” Lee said. “I felt a lot of pressure having to defend the title for a third time. But I kept on telling myself that I could do it. Now, I want to give myself a break.”

Over the past few years, Lee and Kodaira had been positioned as rivals, but before the rivalry began, they have been longtime friends and have competed together since 2004.

Though she failed to win her third straight gold medal, Lee became the first Asian speed skater to medal in the women’s 500-meter at three Olympics in a row.

While she was considering retirement after the 2010 Games, Lee continued for another eight years, just to be able to compete in front of the home crowd. Having finally reached her goal, she is uncertain whether she will attempt an appearance in Beijing.

“I can’t promise anything [about the Beijing Olympics],” Lee said. “I just finished my race. I still have so much time until then so I’ll talk about it later. But if I have the ability, then I think I should compete for another year or two. My preparation for the past four years was very difficult. But now, I think I can enjoy skating, and not stress about the result.”

Lee has competed in four straight Olympics, beginning with the 2006 Games in Turin. After winning gold at the 2010 Vancouver Games, Lee quickly became a big name in Korea, and after she defended her title in Sochi, she quickly became one of the biggest names in the sport.

After the Sochi Games, Lee fell into a slump due to multiple injuries. While she underwent treatment, Kodaira quickly claimed the top spot in the 500-meter while training in the Netherlands with coach Marianne Timmer, the two-time Dutch gold medalist.

The stint in the Netherlands clearly paid off, as shown by her performance at recent ISU World Cup events.

Though the two started competing together back in 2004, there was hardly a rivalry between them at the time.

Kodaira won each of the ISU World Cup 500-meter races this season. Kodaira broke her personal best at this season’s fourth ISU World Cup Speed Skating event in December with 36.50 seconds, but Lee still holds the world record of 36.36 seconds, which she set at a 2013 World Cup meet at the Utah Olympic Oval in the United States.

“I knew that the Olympic record would be broken,” Lee said. “The ice quality in Gangneung was better than it was in Sochi. I wasn’t surprised, since I was also focused on coming in at less than 37 seconds. The world record will also be broken someday.”