Team Kim defeats Sweden to tie for the lead

Team Kim defeats Sweden to tie for the lead 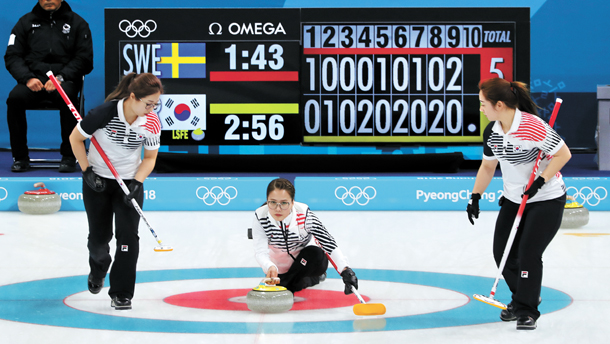 The Korean women’s curling team competes in a round robin match against Sweden at Gangneung Curling Centre in Gangwon on Monday. By defeating Sweden 7-6, Korea is now tied with Sweden for the lead. [YONHAP]

The Korean women’s curling team, also known as Team Kim, has pulled off the biggest upset at this year’s Winter Olympics by ranking first in the round robin after defeating top-ranked Canada, fourth-ranked Great Britain, 10th-ranked China and now fifth-ranked Sweden in a nail-biting game on Monday that finished 7-6 at the Gangneung Curling Centre in Gangwon. 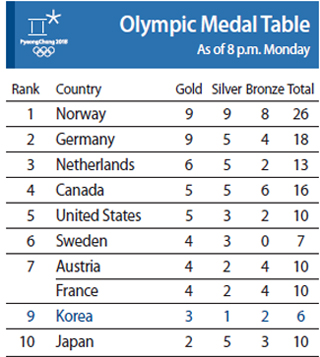 Korea is now tied for the lead with Sweden at five wins and one loss.

Though Korea allowed a point to Sweden, they quickly retook the lead by scoring two points in the second end. Sweden attempted a “blank end,” where a team purposely doesn’t score and tries to score multiple points in the following end, but Korea ended up scoring two points. Then, by only allowing one point in the fifth, Korea maintained its one-point lead.

In the sixth end, Team Kim’s skip, Kim Eun-jung, made a shot and extended their lead to 5-2. Korea scored two more points in the eighth, but was then almost on the verge of an extra end by allowing Sweden to score two points. But Anna Hasselborg, Team Sweden’s skip, made a mistake on her last shot and Korea secured its fifth win in the round robin game.

“We thought Sweden was going to be the strongest team among the participating teams,” said Kim Eun-jung. “We were being careful with the team’s aggressive play. We were able to add points by playing as simply as possible. We got a good result by staying focused until the end.”

Only the top four teams in the round robin will advance to the play-offs. Normally, a team with six to seven wins advances.

Curling, sometimes known as “chess on ice,” involves a team captain, or “skip,” sliding granite stones known as “rocks” over ice toward a target. Teammates sweep in front of the sliding rock with brooms in order to decrease friction. This allows it to travel farther and makes it curl, or rotate, less. Each team slides eight stones per end, and the team with the higher score by the 10th end wins.

Teams have four players, with one substitute player, and are usually named after the captain. But in the case of Team Kim, the name refers to everyone on the team, as all of the members have the same surname: Kim Eun-jung, Kim Yeong-mi, Kim Seon-yeong, Kim Kyeong-ae and substitute Kim Cho-hi.

So does the head coach, Kim Min-jung. But despite what some may think, only Kim Young-mi and Kim Kyung-ae are related ? they’re sisters.

Though the round robin has not been finalized, Team Kim’s performance so far has been incredible given that Korea first competed at the Olympics in 2014 at Sochi, where it finished eighth among 10 teams, with a record of three wins and six losses. At the time, Team Kim didn’t qualify, as they lost at the national team qualification game. Unlike in other Olympic sports, curling requires players to really gel and so whole teams are selected rather than choosing five individuals to then form a national team.

After losing their chance to represent Korea at Sochi, Team Kim won the Pacific-Asia Curling Championship in 2016 and defeated Canada’s Team Johnson, the 2014 Sochi champions.

Prior to PyeongChang, Team Kim beat Canada’s Team Homan, the reigning world champion, at the Meridian Canada Open Grand Slam of Curling in Alberta in January. Team Homan is representing Canada at the Games.

Team Kim will play against the United States today at Gangneung Curling Centre at 2:05 p.m.