A sacrifice for Detroit

A sacrifice for Detroit 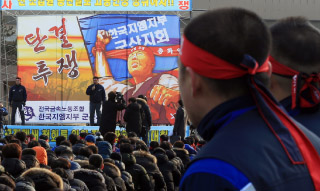 Labor union members of GM Korea are demanding the company withdraw its decision to shut down a factory in Gunsan, North Jeolla. [YONHAP]

Feeding people well should be the top priority in politics, according to Jeong Yak-yong, one of the greatest thinkers of the Joseon period (1392-1910). The wellbeing of people in the modern age should mean economic prosperity, job creation, retraining, creating an environment for innovation and stable energy supplies. A day before the Lunar New Year holidays began on Thursday, GM Korea’s Gunsan factory in North Jeolla province was shuttered temporarily ahead of permanent shutdown planned for May. The company has three other factories in Bupyeong, Changwon, and Boryeong.

The Detroit-based carmaker could pull out of Korea entirely. If it does, over 300,000 jobs in the parts supply chain and related industries would be lost.

Park Seok-moo, head of the Dasan (penname of Jeong Yak-yong) Research Institute, said in 2004 that good politics comes down to recruitment of the right people and strengthening of national wealth. He advised the government of then-liberal president Roh Moo-hyun to concentrate on placing people in the right places and bolstering national wealth instead of hunting down pro-Japanese figures from the colonial age and probing questionable deaths under past military regimes. Today’s liberal ruling power, engrossed with investigations of wrongdoings by past conservative governments, should pay heed to the scholar’s advice. The presidential office and ruling Democratic Party must focus its resources on saving the economy. If the economy goes down, so does everything else.

The Moon Jae-in administration vowed constitutional reform to decentralize and strengthen the autonomy of local governments to make regional economies as rich as the capital area. But it has done little to stop the closure of a major factory in Gunsan. A government accustomed to too much talk and too little action is to be blamed. There is no one in the government who speaks out and answers for its action.

Where have all the champions of income-led growth, steep increases in the minimum wage, a crackdown on real estate speculators and the phasing out of nuclear power gone? We hear little from Moon’s top policymakers — policy chief Jang Ha-sung, economic aide Kim Hyun-chul, Senior Presidential Secretary Hong Jang-yo, and Senior Secretary for Social Affairs Kim Soo-hyun — on the affairs of GM. Deputy Prime Minister for the Economy Kim Dong-yeon hardly seem to have any power in policymaking. Paik Un-gyu, minister for trade, industry and energy, only repeats textbook-like comments. Moon’s economic team — mostly comprised of scholars who learned about the economy from mere books — is showing its limits in the face of real trouble.

GM Korea has been breeding a malignant tumor under the negligence of past governments for the last 20 years. Workers in Gunsan received 80 percent of their monthly pay plus annual bonuses while working barely over a week a month for the last two years. Korea does not have any strong logic to stop GM from leaving Korea. The June 13 local elections are coming up. The ruling party cannot risk major losses in its first election since Moon took office last May. It would do everything to prevent a GM pullout. But economic decisions should not be swayed by political rationale.

U.S. President Donald Trump told congressmen that he would make GM dump Gunsan and give the jobs to Detroit. It is up to GM to make management decisions, not Trump. But Trump could directly or indirectly pressure GM management through his tweets. Washington has announced measures to block Korean steel imports. Moon must get his priorities straight. He must pay more attention to solving economic problems.