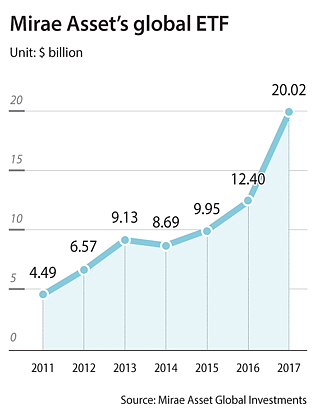 Mirae will now be managing a total of $30 billion in exchange-traded funds (ETF), putting the Korean company at 18th among the world’s 319 ETF management companies. Before the acquisition, Mirae ranked 21st, managing $20 billion through 237 EFTs globally by the end of last year. The total value of the ETFs it manages was up 61 percent from the previous year’s $12.4 billion.

The company’s representative ETFs are investing in robotics and intelligence companies, lithium and battery tech as well as dividend ETFs.

The BOTZ ETF, which invests in robotics and artificial intelligence companies, saw its yield surge more than 58 percent last year, which is double the increase of the Nasdaq last year and 2.5 times more than the Kospi’s during the same period.

“I have decided to invest in Global X as it resembles Mirae Asset’s competitiveness 15 years ago,” said Park Hyeon-joo, Mirae Asset Financial Group’s chairman, adding that the deal not only has set the foundation for the Korean financial company’s global expansion plan but also promises additional deals at home and abroad.

Since opening up its first overseas company in Hong Kong in 2003, Mirae Asset Global Investment has been expanding in 12 countries, including the United States, the United Kingdom, India and Brazil.