Mail delivery is getting greener

Mail delivery is getting greener 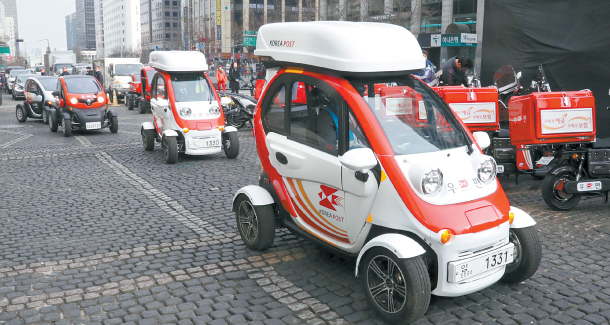 Renault Samsung Motors’ electric vehicle Twizy is tested in front of a post office in Gwanghwamun in central Seoul on Monday. [YONHAP]

Some 10,000 motorcycles used for mail delivery will be replaced by electric cars over the next three years to cut emissions and to promote the electric car industry in Korea.

The Ministry of Science and ICT and the Ministry of Environment signed a memorandum of understanding Monday at the Gwanghwamun Post Office in central Seoul to cooperate in making mail delivery greener.

“To expand the small electric car market in the country, which is still in its early stage, we will first adopt electric cars made by Korean small and midsize companies,” a spokesperson from the Science Ministry said. “But later we will choose from wider options including imported cars through a bidding process.”

The 10,000 motorcycles to be replaced with electric cars are about 67 percent of all motorcycles used by Korean post offices. After replacing slightly over 1,000 this year, the Science Ministry hopes to replace 4,000 in 2019 and another 5,000 in 2020.

Before actual implementation, the government plans to do test runs from March with 50 small electric cars to get feedback from mail delivery staff and to check the technological features of the cars. 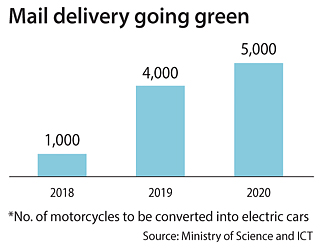 As there will be some narrow streets or traditional marketplaces in which four-wheel vehicles can’t pass, the Science Ministry plans to deploy electric motorcycles.

The Ministry of Environment, which has been promoting sales of greener cars by giving subsidies to consumers, said it will support production and sales of electric motorcycles on Monday, with a goal of upgrading 50,000 old motorcycles.

Homemade electric motorcycles in the market include the Valencia from Green Mobility and Luce from Ecocar. These electric bikes can travel around 45 kilometers on a charge that takes nearly four hours.

The Environment Ministry will first adopt electric bikes in the public sector and also revise its subsidy program for electric bikes for ordinary consumers.