‘Black Panther’ breaks records all over the world

‘Black Panther’ breaks records all over the world 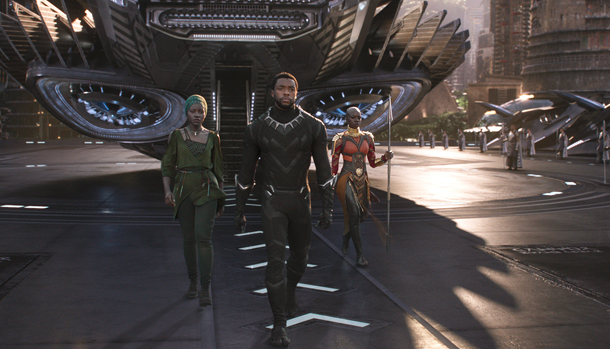 The Marvel film from Walt Disney dominated the Korean box office from Friday to Sunday, selling 1.9 million tickets at 1,620 screens, accounting for slightly more than half of the market share. Since it arrived at local theaters on Wednesday, the film has sold more than 3 million admissions, which was partly driven by the four-day Lunar New Year holiday that kicked off on Thursday.

It is usually a favorable season for local blockbusters to rake in a wide range of audiences, but the winner this year was indisputably “Black Panther,” which became the first foreign film since the 2009 Chinese war flick “Red Cliff 2” to win the holiday weekend.

The feverish anticipation, fawning critical acclaim and groundbreaking cultural meaning pushed “Black Panther” to a record-setting $192 million debut in U.S. and Canadian theaters, becoming the fifth-highest-grossing debut ever, not adjusting for inflation, following only “Star Wars: The Force Awakens,” “Star Wars: The Last Jedi,” “Jurassic World” and “The Avengers.”

In estimates Sunday, Disney predicted a four-day holiday weekend of $218 million domestically and a global debut of $361 million.

Though the film’s international footprint doesn’t include several of the largest markets - China, Russia and Japan - it still ranks among the top 15 global debuts ever. It’s also the highest-grossing February opening weekend.

“All hail the King of Wakanda!” Disney declared, referring to the movie’s mythical and highly advanced African nation.

Ryan Coogler’s film, which cost about $200 million to make, is the most expensive movie with a largely black ensemble and among the few to be centered on a black superhero. The strong opening suggests “Black Panther” will easily set a box-office record for films directed by a black filmmaker.

“Black Panther” set pre-sale records and saw lines around theaters over the weekend, including some who came costumed for the event.

“This is the very definition of a blockbuster: People lining up around the block to see a great movie,” said Paul Dergarabedian, senior media analyst for comScore. “A movie like ‘Black Panther’ is a cultural event that nothing on the small screen can really match in that way.”

Chadwick Boseman stars as T’Challa/Black Panther in the first standalone film for the superhero created by Stan Lee and Jack Kirby in 1966. The cast also features Michael B. Jordan, Lupita Nyong’o, Daniel Kaluuya and Letitia Wright.

The movie has been hugely acclaimed, with a 97 percent fresh rating from Rotten Tomatoes. Audiences agreed, giving it an A-plus CinemaScore. The film especially resonated among African-Americans, who made up 37 percent of moviegoers, according to comScore.

“Inclusion and representation matters,” Hollis said. “We know that great stories can come from anywhere, and our goal is to make films that reflect the wonderful diversity of our world and resonate with audiences everywhere - no matter who they are, no matter where they come from.”

Coming at one of the slower periods of the year, “Black Panther” benefited from little competition, and it can be expected to dominate the marketplace for weeks.

At distant second in the Korean box office was last weekend’s top movie “Detective K: Secret of the Living Dead.” The third film in the period comedy franchise sold 714,000 admissions in three days, while the adaptation of a Japanese crime drama “Golden Slumber” debuted at third, with 628,000 tickets sold.