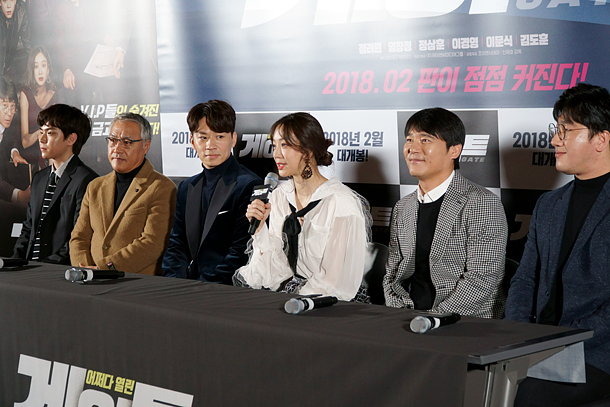 In late 2016, the political scandal surrounding the ousted president Park Geun-hye and her confidante Choi Soon-sil stirred the movie industry, as the news pulled audiences away from theaters. But amid the tense political atmosphere, one film in particular seized moviegoers’ attention: “Gate.” Starring Im Chang-jung and Jung Ryeo-won, the film was said to have been inspired by the Choi Soon-sil scandal.

After being the talk of the film industry for months, “Gate” finally opened to the press on Monday. But in contrast to expectations, the caper movie does not bare much resemblance to the political event that stirred the nation.

The movie centers on people from different generations suffering while they try to make ends meet.

It revolves around an unemployed designer (Jung), who is at the brink of being sold off to prostitution after her younger sister borrows a large sum from a loan shark (Jung Sang-hoon); her father (Lee Kyung-young), who just got out of prison for theft; a former prosecutor (Im), who lost his memory in a car accident; and a young man (Kim Do-hoon) desperate for money to pay for a surgery that his sick mother needs. Each with their own motivations, they work together to steal money from people who have amassed wealth through illegal activities. 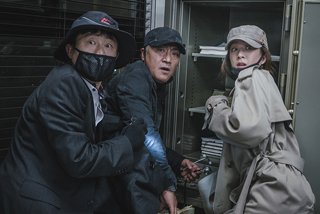 “Gate” revolves around a group of cash-strapped people looking to steal a fortune. [JNC MEDIA GROUP]

Though there are few figures in the film who audiences may find similar to the people involved in recent political scandals, they only take up a small part of the film. Instead, the story mostly focuses on the cash-strapped protagonists and their attempts at stealing money from the wealthy people who have made large fortunes through illegal means.

The film first started off as a heist tale, with the characters stealing money stored inside a vault, but the story was revised to reflect reality following the outbreak of the political scandal.

“After society was put into chaos, many cineastes probably thought about making a film out of what happened [because] movies had grown to be so dull compared to what was being reported in the news,” said Shin.

The filmmaker, who also wrote the script, further explained that his script suddenly seemed boring compared to what he had encountered on the nightly news. So he instead turned the movie into a black comedy satirizing the real world.

But despite his original intentions, many scenes had to be cut for the final script.

“When I first read the script, there were quite a few scenes that seemed to have been directly influenced [by the political scandal],” said Im, who also produced the flick.

The actor said that he felt concerned that the scenes could affect the director’s career, and therefore, he and the director worked together to not to make the similarities seem too obvious. But the actor added, “If it seems like [it was inspired by the Choi Soon-sil scandal], I won’t deny it.”

“[‘Gate’] is a fun movie that has a great imagination. Please enjoy the film instead of trying to search [for its resemblance to the real-life scandal],” said actor Jung Ryeo-won.

“Gate” is slated to arrive in theaters on Feb. 28.