Political photo bomb leads to outrage over abuse of power

Political photo bomb leads to outrage over abuse of power 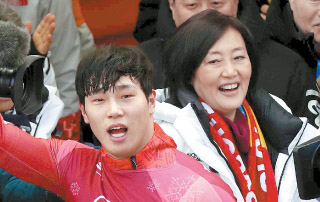 When Yun Sung-bin crossed the finish line last Friday to win Asia’s first medal in an Olympic sliding event, what awaited him was a storm of flashlights and roaring chants from local fans.

It was Korea’s second gold medal at the PyeongChang Winter Games, one that came with more significance here because Friday was Lunar New Year Day, one of the country’s two most crucial holidays for family gatherings.

History was made. The moment could not have been a better chance for Korean politicians to steal a share of media attention. Rep. Park Young-sun of the ruling Democratic Party did not hesitate to do just that.

One of the first people to approach the 24-year-old athlete after he passed the finish line was Park. The zone was strictly off limits, only accessible to holders of the so-called AD (accreditation) Card. Park did not have an AD Card. Not even Yun’s own mother and sister, who were in the stands, had one.

But minutes later, articles swept the internet featuring Park and some other sports officials posing with Yun.

Korean netizens became furious at the scene and accused the lawmaker of using her social status to gain exclusive access, calling it an example of Korean society’s deep-rooted culture of “gapjil,” or abuse of power.

“Things have changed from the past,” said Kim Seok-ho, professor of sociology at Seoul National University. “Korea’s general public requires elite members to act with a high level of rationality and legitimacy, but our leaders, aged between 50 and 70, are finding it hard to catch up with that change in thinking.”

Park issued an apology through her Facebook account last Saturday, saying the International Olympic Committee (IOC) had given her a Distinguished Guest Pass for the event and that she was personally guided to stand near the finish line.

The incident is only one of several gapjil cases plaguing the PyeongChang Olympics, as Korea’s young generation takes their rancor online to vent frustration over elite bureaucracy and what they see as its members’ arrogant attitudes toward athletes and volunteers.

Last week, Adam Pengilly, a British member of the IOC, was dismissed from the Games after allegations surfaced that he verbally and physically abused a volunteer security guard.

Lee Kee-heung, president of the Korean Sport & Olympic Committee, was accused of speaking ill to another volunteer when he and his colleagues were asked to move to a different seat at a cross-country skiing event, which had been reserved by the IOC.

Koo Jeong-woo, professor of sociology at Sungkyunkwan University in Seoul, said the friction is the result of a shift in how young people see and understand the world of sports.

“For a long time, sports were considered a vehicle for national pride, and Koreans in their 50s to 70s still think so,” said Koo. “But those in their 20s to 30s conceive of sports as an objective, something worth enjoying and playing fairly throughout the process. That’s where this whole ‘collision of values’ takes place.”