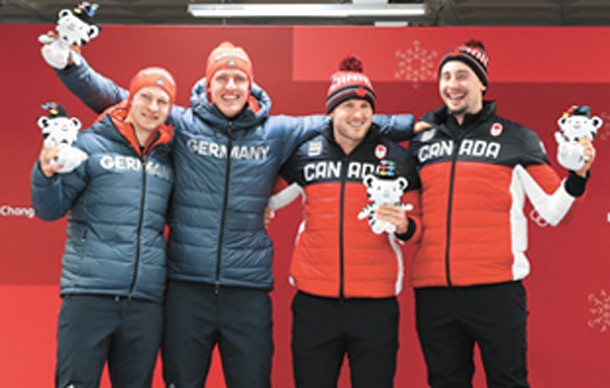 From left: Francesco Friedrich and Thorsten Margis of Germany and Justin Kripps and Alexander Kopacz of Canada celebrate after both teams won gold in the two-man bobsled at the Olympic Sliding Centre in Pyeongchang, Gangwon, on Monday. [YONHAP]

Justin Kripps and Alexander Kopacz of Canada were thoroughly confused when they crossed the finish line. They knew they had just won an Olympic gold medal for Canada and were puzzled by why the rival Germans were running their way to celebrate. 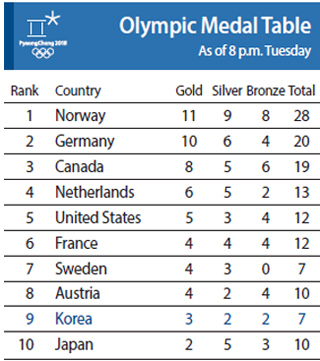 Eventually, it made sense.

The closest Olympic sliding race in history had two sets of winners Monday. Canada and Germany share gold from the two-man bobsled event at the PyeongChang Olympics after Kripps and Kopacz finished their four runs in the exact same time as the German duo of Francesco Friedrich and Thorsten Margis.

“I managed to see the clock that said No. 1 on it,” Kripps said, as the German team sat to his right after the race. “At first I thought that we won outright, and then these guys jumped over and they were super excited. And I was like, ‘These guys are really happy for us.”

Well, technically, they were.

Kripps, the final driver on the track, had the lead for much of the fourth heat. But with the margins so close, Friedrich started to think that a shared gold was somehow possible.

Turns out, he was right.

It was Canada’s second gold medal in two-man bobsledding - both coming in a tie. The Canadians shared gold with Italy in 1998 with Pierre Lueders driving that sled for Canada.

Lueders was there Monday night since he now coaches the host Korea.

“Pierre is actually the guy who taught me how to drive a bobsled,” said Kripps, who was born in Hawaii, calls Canada home and also holds an Australian passport. “It was pretty cool that he was here to see it.”

Latvia got bronze, with Oskars Melbardis and Janis Strenga finishing 0.05 seconds back to complete the closest three-sled finish in Olympic history. And afterward, Kripps, Friedrich and Melbardis all not only had similar times - but similar thoughts.

“It was crazy,” Friedrich said.

Perhaps even more unbelievably, it was the third time a two-man competition ended in a tie. The other was in 1968, when Italy got the gold over West Germany even though they finished with the same time. Italy got the win that year because of a tiebreaker that’s no longer in use, with the edge going to the sled with the fastest heat.

Nico Walther and Christian Poser of Germany, the leaders after Sunday’s first two runs, were fourth - only 0.20 seconds back. Johannes Lochner and Christopher Weber, also from Germany, were fifth in 3:17.14.

“This is what makes the sport amazing,” U.S. bobsledder Nick Cunningham said. “Anyone can win on any given day.”

Or on this day, two different anyones.

“It’s really special that we managed to come out on top and tie with such a good team,” Kripps said. “We pushed hard from the first heat to the last and in general I thought we executed better as we went … and we needed every bit of it, too.”

Based on their World Cup two-man results this season, the logjam going into the finale wasn’t a total shock.

Kripps finished no lower than fourth in every two-man race all year and was the World Cup overall champion. Friedrich was first or second in each of his last five races. Lochner ended the regular season by winning consecutive medals. Walther was one of only two pilots with multiple two-man victories this season. The surprise was Melbardis, who medaled in only two of his most recent 17 World Cup two-man events.

But he loves the Olympics; Latvia has two bobsled medals in its history, and he’s driven both - the other being a four-man silver at the 2014 Sochi Games.

“This was an honor,” Melbardis said.

Won Yun-jong and Seo Young-woo of Korea finished fifth with a time of 3:17.40.