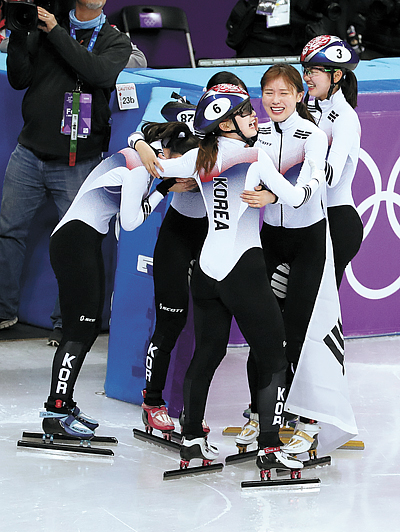 The Korean women’s short-track team celebrates after winning gold at the women’s 3,000-meter race on Tuesday at the Gangneung Ice Arena in Gangwon. [YONHAP]

The Korean women’s short-track team once again proved its dominance, winning gold in the 3,000-meter relay race at Gangneung Ice Arena in Gangwon on Tuesday.

The women’s team finished the race with a time of 4 minutes and 07.361 seconds, 8.54 seconds ahead of Italy. As both Canada and China got disqualified, the Netherlands, which competed in the Final B, ended up taking bronze.

Despite racing in the lower group, the Netherlands had an impressive race, setting a new world and Olympic record, clocking 4 minutes and 03.471 seconds.

Korea got off to a slow start, starting with Shim Suk-hee, Choi Min-jeong, Kim A-lang and then Kim Ye-jin. Starting at the back of the pack, Korea didn’t move up to second until fewer than six laps remained as Choi raced the last two laps. But in the process of switching racers from Kim A-lang to Choi, Kim fell, causing Canada to fall behind.

With only four laps remaining, Choi successfully took the lead from China and led Korea to its second-straight gold in the women’s relay at the Olympics.

Though Korea finished first, quite some time was needed while the referees reviewed Kim A-lang’s fall. During the wipeout, Korea seemed to have interfered with Canada and China. Since the referees have been a lot stricter regarding physical contact, the countries patiently waited in anticipation of the final result.

With this victory, Korea’s women’s team continues its dominance in the event, winning its sixth gold medal since the 1994 Winter Games, when it first competed in the 3,000-meter relay race. The women’s team has won gold in all the Games except the 1992 Albertville Games, where they did not compete, and the 2010 Vancouver Winter Games.

Prior to the relay, three members on the team — Shim, Choi and Kim — each finished first in their 1,000-meter heats. The Korean men’s short-track team cruised through the 500-meter heats, finishing first.