While Korea’s speed skating men’s team pursuit got off to a great start by winning the quarterfinals, the women’s team is receiving nothing but criticism. The team not only failed to advance to the semifinals at the Gangneung Oval in Gangwon on Monday, but is now also mired in controversy. 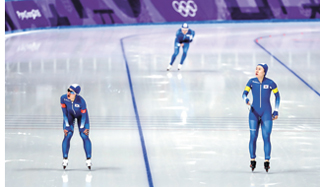 After Korea finished seventh in the quarterfinals with a time of 3 minutes and 03.76 seconds, Kim Bo-reum and Park Ji-woo caused uproar after they appeared in a post-race interview where they seemed to suggest that the result was the fault of their teammate Noh Seon-yeong.

In the women’s team pursuit race, two of three teams start on opposite sides of the track and skate six laps. If any of the skaters get caught by an opposing skater, the team automatically fails to qualify regardless of the result. The three-women team raced against the Netherlands.

In addition, the final time is recorded based on the time the last racer crosses the finish line. Due to this, the three skaters take turns leading throughout the race. The person at the front of the pack faces a much harder task as they take the brunt of the air pressure for their teammates. As a result, the best skater spends most of her time at the front of the pack, while the rest of the team pushes her from behind.

While teamwork is the most important factor in the event, the Korean women’s team showed little sign of working together - Kim and Park finished more than 3 seconds ahead of Noh.

With the athletes already facing mounting criticism for not working together, the trouble really began in Kim’s post-race interview, where she seemed to blame Noh for the failure.

“I was going to lead for about 50 percent of the race and have Park Ji-woo get our speed up at the beginning of the race,” Kim said. “We came up with a strategy to have Seon-yeong, skating in the middle of the group, play the least role in the race.”

Just as Kim said, the actual race seemed to go to plan in the beginning. Kim led for three laps while Park and Noh each took the lead for a lap and a half.

But the group’s final lap is where it all went wrong. The team raced the final lap with Kim at the front followed by Park and Noh, but before reaching the finish line Noh had fallen far behind.

“Before the race, I expected that we could qualify if we can finish close to 3 minutes and 00 seconds,” Kim said. “So we raced as fast as we could in the final lap but since the final record is determined by the time the last racer of a team crosses the finish line…”

When Kim and Park finished the race, they finished at around 2 minutes and 59 seconds.

“Once I saw the board after the race, I was embarrassed to not see her,” Park said. “During the race, our coaches told us that she [Seon-yeong] was way behind, but I didn’t realize it because I was so nervous to race in my very first Olympics.”

As criticism mounted against the team’s unsportsmanlike conduct, with a petition on the Blue House website calling for Park and Kim to be disqualified passing 200,000 signatures in just a day, the team headed a press conference at Gangneung Oval on Tuesday, apologizing for the lack of teamwork. Only head coach Baek Chul-gi and Kim attended the conference.

“I had an interview after the race and I think a lot of people were hurt,” Kim said. “I wanted to say I am very sorry and I am reflecting on my attitude. It is my fault that I didn’t check the skaters behind me when I was leading. I made the biggest mistake.”

Kim’s attitude may have already taken its toll. On Tuesday, her main sponsor Nepa announced that it would not be renewing her contract once it ends on Feb. 28.