With a medal, Cha Min-kyu achieves his goal

With a medal, Cha Min-kyu achieves his goal 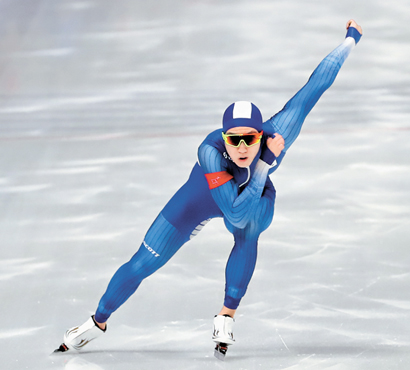 Despite tying the Olympic record, Korean speed skater Cha Min-kyu took home silver in the men’s 500-meter race, as his time of 34.42 seconds was just 0.01 of a second shy of gold, at Gangneung Oval in Gangwon on Monday.

From left: Cha Min-kyu, left, and the Korean speed skating team coaches react after seeing Norway’s Havard Lorentzen beat Cha by 0.01 of a second. Cha congratulates Lorentzen, left, after finishing his race at Gangneung Oval in Gangwon on Monday. [YONHAP]

In an interview before the start of the race, Cha said he gained confidence after watching Kim Min-seok win bronze in the 1,500-meter. “I’ll give it my all and have no regrets,” the 24-year-old told reporters before stepping out on the ice.

Racing in the 14th pair along with Gilmore Junio of Canada, Cha had a slow start, reaching the 100-meter mark in 9.63 seconds. He then sped up, completing the next 400 meters in only 24.79 seconds to tie the Olympic record set by Casey FitzRandolph of the United States at the 2002 Winter Olympics in Salt Lake City.

“Considering my ability, I’m satisfied with the time in the first 100 meters,” Cha said. “But I’m a little disappointed about my last 100 meters.”

Despite a beyond impressive Olympic debut, Cha’s lead didn’t last long as Norway’s Havard Lorentzen soon beat Cha’s time by 0.01 of a second, setting a new Olympic record. Lorentzen was the top-ranked skater in the men’s 500-meter this season. Gao Tingyu of China won bronze.

“When I saw the result after my race, it was faster than I thought and I somewhat expected to medal,” Cha said. “I was a bit disappointed because I thought I could potentially get gold. It was disappointing to give away the lead but since my goal was to finish within the top three, I’m thankful for the result.”

Though a little disappointed to have lost his shot at winning another surprise gold for Korea, Cha was still satisfied with silver, as his goal for PyeongChang was to medal.

“I couldn’t believe that I was competing at the Olympics until I stood on the track,” Cha said. “I started to feel it once I heard the crowd.”

When asked what 0.01 of a second meant to him, Cha responded, “Short legs.”

Cha’s silver is an impressive feat, as he entered the race ranked 17th in the world. This season, Cha’s best finish was second during the International Skating Union (ISU) World Cup in Calgary, Alberta. In the race, Cha finished 0.001 of a second behind gold medalist Alex Boisvert-Lacroiz of Canada.

This is Korea’s first medal in the 500-meter since Mo Tae-bum’s gold at the 2010 Vancouver Games. Since then, men’s short distance has slowly become increasingly less popular with fans, as there haven’t been any sprinters taking home medals. Until last year, Cha was a virtual unknown to fans of the sport.

Having won the 500-meter and 1,000-meter at the 2017 Winter Universiade in Almaty, Kazakhstan, and the bronze at the 2017 Asian Sapporo Winter Games, Cha quickly became Korea’s speed-skating rising star.

Like Lee Seung-hoon and Kim Bo-reum, Cha started the sport as a short track speed skater as a hobby in the third grade. But once he enrolled in Korea National Sport University, Cha switched to the speed skating, since he didn’t like the physical contact that occurs on the corners during short track races. Soon after he switched, Cha injured his right ankle not long before national team qualifications for the 2014 Sochi Olympics.

Due to the injury, Cha had to wait another four years to get a chance to compete at the Olympics.

“I was told that it would be hard to recover,” Cha said. “I even thought of quitting skating and finding a different career. But instead, I continued rehabilitation and I got better earlier than I expected.”

Coming from a short track background, Cha has great skating abilities when it comes to the curves.

Jaegal Sung-yeol, a former Olympic speed skater who is now a commentator for SBS, spoke highly of Cha’s abilities in the corner saying, “Lorentzen has better muscular strength and is stronger, but Cha Min-kyu was better on the curves.”

“Cha Min-kyu’s style is similar to that of women’s 500-meter gold medalist Nao Kodaira of Japan,” Jaegal said. “Normally, skaters get an explosive start and try to maintain it until the last corner. But both Cha Min-kyu and Kodaira speed up in the last section of the race, fighting off centrifugal force.”

Now that he reached his goal of medaling at PyeongChang, Cha hopes to see better results at the next Olympics and in the upcoming season.

“I keep finishing second, short by one hundredth or one thousandth of a second,” Cha said. “For next season, I will work harder and put more effort into reducing mistakes.”