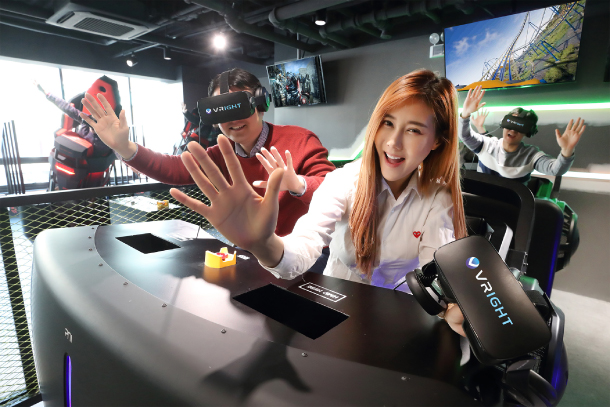 KT staff test-ride a virtual reality simulator at VR gaming venue Vright established by KT and GS Retail on Tuesday before its official opening scheduled for next month. [KT]

KT is turning to virtual and augmented reality gaming in its first attempt to turn a profit from its high-speed 5G network, following the technology’s successful trial at the PyeongChang Winter Olympic Games.

According to the mobile carrier on Tuesday, it aims to reap in 100 billion won ($93 million) from its virtual reality (VR) and augmented reality (AR) business by 2020, expanding the local VR and AR industry from the current 180 billion won market to a trillion won market at the same time.

While AR provides a composite view of the real world with computer graphics laid over it, VR takes users into a completely immersive computer generated world rather than layering images over reality. Both technologies, according to KT, are services that operate best on a 5G network as they need to be backed by high-speed and low-latency internet connection.

In its first step toward establishing its 2020 goal, KT is opening up a VR and AR game venue dubbed Vright in Sinchon, western Seoul, in March in partnership with GS Retail.

KT’s role is to provide its 5G network and the latest immersive content from leading developers at home and abroad. GS Retail will manage operations at the venue and contribute to the franchising of the business.

Franchisees will be able to use the content KT has accumulated after paying an “appropriate usage fee,” according to KT.

“VR and AR gaming is already a profitable business and this is the why our early investment is focused on VR and AR games,” said Koh Yoon-jeon, chief of the future business development unit at KT.

“But we are preparing for other services backed by VR and AR in other sectors such as medicine and education, though we can’t reveal details just yet.”

According to a KT spokesperson, the company plans to open up about three Vright venues directly managed by KT and GS Retail in Seoul within this year, then take franchisee applications from next year, hoping to grow to as many as 200 locations by 2020. KT believes this process will help venue operators access a wide range of fresh immersive content and raise public awareness of VR and AR.

KT also vowed to create a five billion won fund to support local VR and AR content developers and to secure copyright of renowned global games to bring them into the country. The carrier is also gathering VR device manufacturers, gaming and content makers as well as tech companies to establish a so-called VR Alliance that will focus on promoting the local VR and AR market within this year.

Kim Jae-heon, executive director at VR cafe franchise operator VR Plus, said he welcomes the entry of a conglomerate like KT as the market needs big players that can inject large investments and skilled marketing strategies in order to develop.