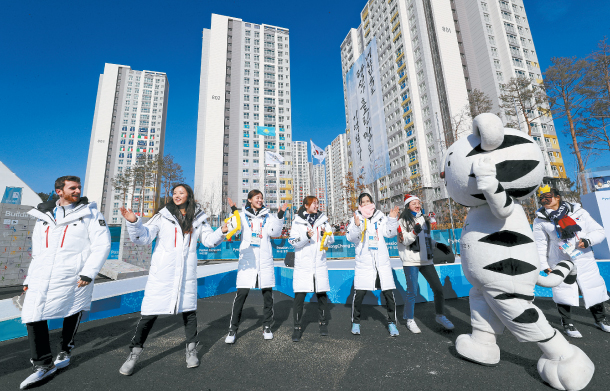 Korean athletes celebrate their entry to the Gangneung Olympic Village in Gangwon, which is equipped with home-network systems. [YONHAP]

Athletes and journalists at the Olympics now have free and easy access to their apartments thanks to a smart band that grants entry without the use of a card or key - and tells them what the weather is like at the same time.

This is just one of dazzling technological achievements that the Games have given Korea a chance to showcase.

For the state-run LH Corporation, pride of place goes to its smart band - also known as the geo band - which is the result of a collaboration with the Ministry of Science and ICT. It includes an automatic door system developed by LH that uses a wristband to identify occupants and grants them access to their buildings and apartments. However, this feature is only available at the athletes’ and media villages in Gangneung, built by LH.

Other features of the band include providing fitness data such as calories burned as well as weather information and air quality readings. The LED on the band also displays text messages and game schedules. Currently, 3,483 geo bands have been distributed to athletes and journalists.

The home-network system being used at housing units in the athletes’ and media villages in Gangneung, Gangwon, allows residents to control lighting, heating, ventilation and gas with one’s smartphone connected to the wall pad.

The system also identifies strangers and automatically records them if they loiter outside, allows occupants to monitor surveillance cameras on their smartphones and triggers an alarm if movement is detected when the apartment is supposed to be vacant.

People within the home are also alerted to the arrival of a vehicle that has been registered in the system, such as a family car.

The wall pad can be used in four languages, while the smartphone app is available in eight: Korean, Chinese, English, Japanese, French, German, Italian and Russian.

“The foreign athletes and journalists seem to be impressed with the home-network system, which is common in Korea but rare overseas,” said Kang In-young, assistant manager of the smart home department at LH. “They especially find the visual communication system to be sophisticated. We are receiving great reviews.”

LH has been focused on leading the smart home development in Korea setting it as one of its core businesses.

LH is also running a “Home Information Centre” at the athletes’ village and another at the media village, which features the home automation system already applied in the apartments.

Several major venues, including the media village, the International Broadcast Centre (IBC) and Kwandong Hockey Centre were built using Posco’s high-end steel, which is cost-effective yet resistant to disasters such as fires.

According to the Korean steel company, the 51,024-square-meter (12.6-acre) IBC, the largest venue at the Winter Olympics, was completed in April using custom-made H-beam or Pos-H steel. Pos-H is a steel product made from wielding hot-rolled steel plates and thick plates. It is not only earthquake-resistant but also easily customized to meet different design needs and can therefore reduce construction time while also cutting costs.

Korea Hydro & Nuclear Power (KHNP) has installed 90 street lights that run on solar energy along the 3 kilometers (1.9 miles) of the PyeongChang Olympic Village. The lamps were installed between August and October. According to the energy producer, the solar lamps can burn for seven days on a single charge, and each lamp can save 57.6 megawatts annually.

These lamps also have a lifespan five times longer than ordinary lamps, subsequently reducing carbon emissions by using less energy. It said between 2014 and 2016 that the government was able to save 180 million won ($167,400) on public electricity costs by running 607 of these lamps. KHNP has installed more than 1,000 such lamps nationwide since 2014.

The government is also chipping in by providing 6,000 cases of recycled A4 paper, as well as 13,000 paper trash bins. The paper will be placed at the IBC for journalists to use. The Ministry of Science and ICT said the paper will be collected after use and recycled again. The value of the paper returned will be donated by the institute that developed it to social welfare facilities in Gangwon province.

With efforts such as these, the government has been hoping that PyeongChang will be the first zero-carbon emissions Games. It is therefore operating a center promoting Korea’s recycling system at Festival Park in order to raise awareness about global warming and environmental preservation.

“There is a continuous need for high-valued technologies such as carbon mineralization,” said Kim Jung-won, director general of science and technology at the Science and ICT Ministry, “and we hope to raise awareness about carbon emissions even after PyeongChang.”