Visiting GM exec says pulling out can be avoided

Visiting GM exec says pulling out can be avoided 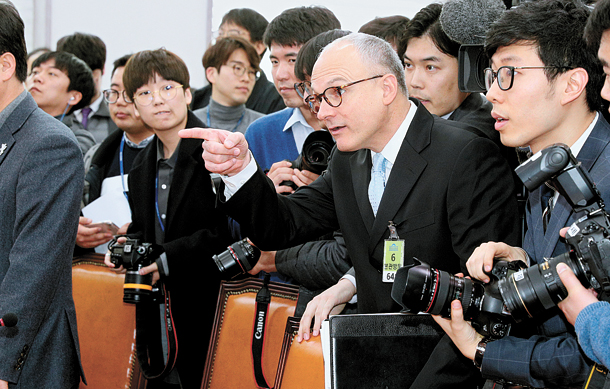 Barry Engle, executive vice president of GM, attends a meeting with Korean lawmakers on Tuesday at the National Assembly in western Seoul to discuss the fate of GM Korea’s Gunsan plant and a possible withdrawal from Korea in the future. [YONHAP]

Barry Engle, executive vice president at GM, said it plans to maintain its ailing Korean unit, but remained vague on whether that depends on support from the government.

“It is our preference to stay here in Korea and to fix the business and make it healthy,” Engle told reporters after a closed-door meeting Tuesday with lawmakers at the National Assembly in western Seoul.

“In order to do that, there is a turnaround plan that we have developed and that plan includes significant investments, new products and also restructuring activities,” he added.

Engle was ambiguous about specifics of the turnaround plan.

“We require cooperation and helpful support from all stakeholders,” Engle said when asked what the U.S. headquarters expects from the Korean government.

“Details are private,” he said.

Starting production of two new models at Korean plants to raise the local unit’s output to more than 500,000 units per year is included in GM’s plan for Korea. Whether such production is contingent on Korean government support is not known.

“[Engle hinted at the possibility of] the U.S. headquarters bringing two competitive models to Korea’s Bupyeong and Changwon plants,” said Rep. Kim Sung-tae of the main opposition Liberty Korea Party, who attended the meeting with Engle.

Details about injecting state funds in the beleaguered automaker will depend on the result of due diligence. The state-owned Korea Development Bank is the second-largest shareholder in GM Korea, after General Motors, holding 17.2 percent of its shares.

The KDB will appoint an outside auditor to look into GM Korea’s financial statements to see what led to an accumulated loss of 2.5 trillion won ($2.3 billion) over the past four years.

“Engle agreed on a third party doing due diligence on the troubled automaker,” said Kang Hoon-sik, a spokesperson for the ruling Democratic Party at a briefing Tuesday. “Engle said he will talk with the head of the Korea Development Bank.”

GM Korea’s labor union, on the same day, said it is willing to cooperate if the government and the company agree on a concrete road map that would guarantee jobs.

“If the company unveils a concrete plan on new models and export volume, the labor union is ready to yield,” said Lim Han-taek, chief of GM Korea’s labor union, at a press conference held in Yeouido in western Seoul Tuesday.

The union requested the company to convert its outstanding debt of nearly 3 trillion won into equity. That would need approval from the company’s creditors.

According to Kang from the Democratic Party, Engle reiterated the underutilization of GM Korea’s Gunsan plant and said the company is open to having a third party acquire the factory, which it is planning to shut down by the end of May, putting more than 12,000 jobs at stake.

The government announced Tuesday that it will designate Gunsan a crisis zone in terms of employment and industry.