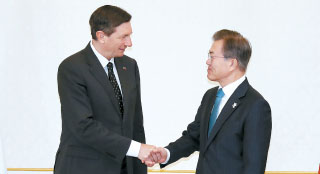 In a bilateral summit held at the Blue House in Seoul, the two leaders stressed the need to expand the countries’ cooperation on political, economic, social and cultural matters.

“I also hope to hold in-depth discussions on ways to increase our cooperation in the international arena,” Moon said, according to Blue House pool reports.

The Slovenian head of state praised Moon for his efforts to peacefully resolve the North Korean nuclear issue.

“I am only one of the EU’s leaders, but I believe the EU needs to more actively get involved in resolving the North Korean nuclear issue, which is a very important security issue currently drawing the attention of the world,” Pahor said through his translator.

“We wonder how we can help and I wish to listen to the president’s opinion on the issue,” he added.

Moon expressed gratitude for Slovenia’s continued support for his country’s North Korea policy and stressed the need to maintain ongoing dialogue with the North to enable the resumption of international discussions on ending the North’s nuclear ambition.

“President Moon asked for President Pahor’s cooperation so that the dialogue between South and North Korea that came before the Winter Olympic Games will contribute to efforts to create an environment for dialogue on the denuclearization of the Korean Peninsula after the Olympics,” the Blue House said in a press release.