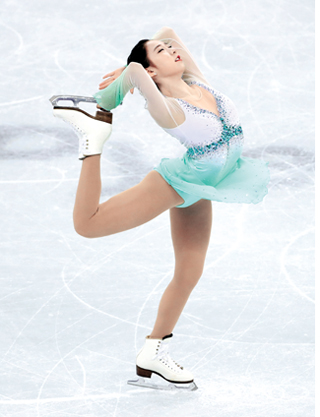 She scored 67.77 points on the first day of the ladies’ competition at the Gangneung Ice Arena in Gangwon, breaking her 10-day-old best of 65.73 set at the team event on Feb. 11.

Her eighth place in the short program is the highest ranking ever achieved by a Korean female skater besides Olympic gold medalist Kim Yuna.

Out of the 30 figure skaters competing at PyeongChang, the top 24 will qualify for the free program on Friday.

The current European champion, Alina Zagitova of the Olympic Athletes from Russia (OAR), took top position with a world record of 82.92 points, surpassing her teammate Evgenia Medvedeva, who earned 81.61.

Canada’s Kaetlyn Osmond placed third with a score of 78.87 and Japan’s Satoko Miyahara was in fourth at 75.94.

Choi was the last skater in the fourth group. She landed a flawless triple lutz and a triple toe loop at the beginning of the program, which gave her 10.70 points, followed by a set of fluid spins and step sequences, all of which were awarded the highest level.

In the latter part of the 2:40 short program, she also landed a clean triple flip and a double axel to score her personal best at her first Olympics.

“I didn’t think of the ranking. My goal was to perform a perfect short program at the Olympics,” said the 18-year-old. “I’m very pleased that I achieved this goal and set a new personal best.”

She said she will do her best to give another clean performance in the free program.

Meanwhile, her teammate, Kim Ha-nul, also qualified for Friday’s free skating, placing 21st in the short program. The 15-year-old made some mistakes in her jumps and finished with 54.33 points, far behind her personal best of 61.15, set at the Four Continents Figure Skating Championships last month.

Kim, the youngest athlete on Team Korea and the fifth youngest of this year’s 3,000 Olympians, felt some pressure skating on Olympic ice for the first time.

“I was so nervous after the warm-up. Even my knees trembled while I was waiting for my turn. But I’m satisfied with my program,” said Kim. “The fans gave me great support and it helped me a lot.