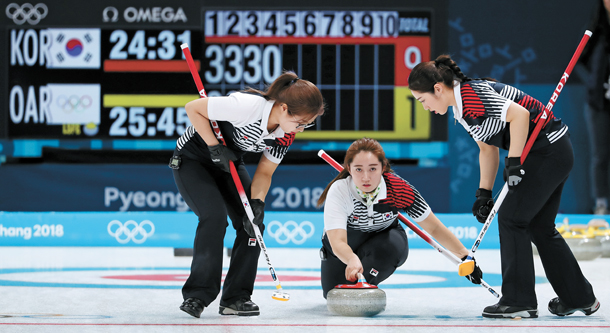 The Korean women’s curling team competes in a round robin match against the Olympic Athletes from Russia at the Gangneung Curling Centre in Gangwon on Wednesday. [YONHAP]

With cries of “Yeong-mi” still echoing around the walls of the Gangneung Curling Centre in Gangwon, the Korean women’s curling team earned its historic ticket into the playoffs at the PyeongChang Olympics.

Not only was Korea’s Team Kim the first of ten participating teams to advance to the playoffs, they are the first ever Korean curlers to reach the semifinals at the Olympics, after the country crashed out of its debut in the Sochi Games in 2014.

The Korean curlers finalized their spot in the playoffs with a 9-6 victory against the United States on Tuesday with two games still to play in the round robin stage. Returning to the ice on Wednesday, Team Kim faced down the Olympic Athletes from Russia (OAR), proving so dominant that the OAR conceded in the sixth end - the earliest that a team is allowed to withdraw - with Korea leading 11-2.

Although the game against the OAR was little more than a victory lap with Korea’s spot in the semifinals already guaranteed, the result does mean that Team Kim has now defeated the top five teams in the curling world.

The OAR never stood a chance against Korea’s curling juggernaut. Team Kim scored three points in each of the first three ends, putting the score at 9-0 before the OAR even had a chance to get on the scoreboard.

Continuing their roll, Korea took on Denmark on Wednesday evening, ending their second game of the day prematurely as yet another team chose to concede in the face of Team Kim’s onslaught. Denmark took an early lead, up 2-1 at the end of the third end, but it didn’t last long. After a flurry of points over the next four ends, the game ended 9-3 to Korea with Denmark conceding.

Korea finished the round robin with eight wins and just one loss.

“We knew that we guaranteed our spot in the playoffs on the 20th but we couldn’t not care about the remaining two games in the round robin,” said Team Kim’s lead Kim Yeong-mi.

Kim Min-jung, Team Kim’s coach, said after the game, “We tried really hard for the players to stay calm and not get excited.”

Prior to the game against the OAR, Korea had an impressive come-from-behind victory against the United States. While losing 2-3 until the fourth end, Korea scored four points in the fifth to triple its score to 6-3. Korea then scored three more points in the remaining ends to become the first team to advance to the semifinals.

Mostly from the small town of Uiseong, Team Kim started curling as a hobby in 2006 when Korea’s first curling club was built.

At the time most of the members of Team Kim were either in middle school or high school. Kim Yeong-mi first suggested to Kim Eun-jung, now the group’s skip, that they start curling afterschool. Later, Kim Kyung-ae, Kim Yeong-mi’s sister, joined the team after she visited the two at the curling center. Kim Seon-yeong was the last Uiseong-based member of Team Kim to join, when Kim Kyung-ae wrote on a board in her classroom saying, “Anyone interested in curling?”

The fifth member of the team, Kim Cho-hi, joined later.

Team Kim’s Cinderella story has captured the hearts of viewers around the world. Stoic skip Kim Eun-jung, in particularly, has made global headlines with her incredibly focused game-face and impressive skill with a curling stone. Her fashionable eye-wear and emphatic yells of “Yeong-mi” - an attempt to encourage, or perhaps scare, her lead - proved to be perfect meme material and the team quickly jumped to the top of social media trending lists after every game.

“My sweeping speed changes depending on Eun-jung’s tone,” Kim Yeong-mi said. “When she calls my name calmly, that means I need to get ready but when she’s rushing, then I need to get it there and sweep as fast as I can. If she doesn’t call my name at all, then Seon-yeong sweeps.”

The members of Team Kim remain blissfully unaware of their immense popularity, at least outside Gangneung Curling Centre, as they all agreed to leave their phones behind when they entered the Athletes’ Village to better allow them to focus on their game.

But the Korean curlers’ story is more than just the tale of a sporting underdog. The team also faced a challenge closer to home - the Korea Curling Federation (KCF) offered it barely any support.

The KCF, already mired in crisis and unable to financially support the curlers, suffered a leadership crisis six months before the Games when it became apparent that ineligible members had voted for Jang Mun-ick in the KCF presidential election in September 2016.

As the KCF spiraled further out of control, it also refused to release the team’s training logs, preventing them from bringing in a foreign coach. The KCF was reportedly unhappy with how many Korean curlers came from North Gyeongsang, and there have been accusations that the organization intentionally tried to sabotage the team. Team Kim and its fans were often forced to support themselves.

This isn’t strictly the case. While it’s true that Kim Eun-jung and her team certainly have the crowd on their side, they weren’t able to take advantage of the early access to the venue that home teams normally enjoy. PyeongChang’s organizing committee shut down the Gangneung Curling Centre in December for some last-minute tests and renovation before the Games.

Though they’ve already made history in Korean women’s curling, Kim Min-jung and the team believes that their challenge is only just beginning.

“Now is the start,” Kim Min-jung said. “It’s just the preliminary rounds until today. To achieve what we’ve dreamed of, we’re trying really hard. We’ll try to be more calm.”

Korea will face Japan in the semifinals on Friday in the Gangneung Curling Centre.