Though the PyeongChang Games will not include traditional floral bouquets in its medal ceremonies, the PyeongChang Organizing Committee for the 2018 Olympic & Paralympic Winter Games (Pocog) will provide medalists with plush toys of the Games’ mascots wearing uhsahwa, a paper flower that was traditionally given to those who passed national exams during the Joseon Dynasty (1392-1910). 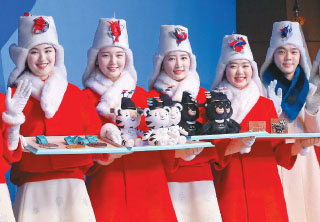 Medalists at the ongoing Winter Games are awarded with a plush toy of the Games’ mascot and a wooden carving featuring the host city. [JOONGANG ILBO]

During the ceremonies, Olympic champions will receive a Soohorang plush toy, along with a wooden carving featuring mountain scenes from the host city and “PyeongChang 2018” written in hangul, the Korean alphabet. Soohorang is a white tiger and the official mascot of the Olympic Games.

Paralympic medalists will be given a Bandabi plush toy. Bandabi is a moon bear and the official mascot of the Paralympic Games. The idea behind these gifts was to combine aspects of Eastern and Western culture, as well as modern and traditional features, according to Pocog. They will be presented on a ceremonial tray with a sky blue border and a non-slip surface.

While some athletes to make it to the podium at both the Olympic and Paralympic Winter Games will receive their medals immediately after their competitions, most will be awarded their medals at the PyeongChang Medal Plaza the next day as part of a wider cultural celebration.

“We will try to show Korea’s unique culture and beauty to the world,” said Lee Hee-beom, the president of Pocog. Victory ceremonies will serve as a celebration both for athletes and fans alike, Lee said, as “they will be one of the most important moments in the lives of the athletes while acting as a cultural festival for fans.”