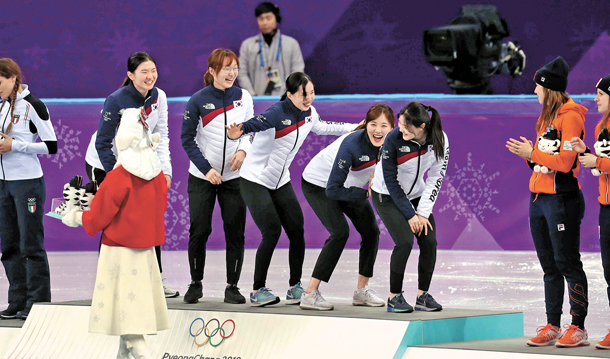 The Korean women’s short-track team surprises audience by imitating a relay move on the podium after winning gold at the women’s 3,000-meter race Tuesday at the Gangneung Ice Arena in Gangwon. [OH JONG-TAEK]

The Korean women’s short-track team once again proved its dominance, winning gold in the 3,000-meter relay race at Gangneung Ice Arena in Gangwon on Tuesday.

The team finished the race with a time of 4 minutes and 07.361 seconds, 8.54 seconds ahead of Italy, which took home silver.

“I am just so happy,” said Choi Min-jeong, who skated the final two laps of the race. “It was something I could never do alone, and it was possible because we trusted our teammates. That gave us confidence.”

Korea started off at a steady pace, beginning with Shim Suk-hee, Choi Min-jeong, Kim A-lang and then Kim Ye-jin. Starting at the back of the pack, Korea didn’t move up to second until less than six laps remained.

But with only four laps to go, Kim A-lang fell while pushing her teammate, Kim Ye-jin, forward, causing another Canadian skater to trip in the process.

That didn’t stop Choi from successfully taking the lead from China’s Fan Kexin and winning Korea’s second-straight Olympic gold in the women’s relay.

“We had to calm down and trust each other,” Shim said, “and that’s what made the gold medal.”

Despite Kim’s fall, Park Se-woo, the team coach, later said she played a “critical role” in the race.

Though Korea finished first, the referees kept the crowd and athletes in suspense as they needed quite some time to review Kim A-lang’s fall and other penalties.

Since the referees have been a lot stricter regarding physical contact, the countries nervously waited in anticipation of the final result.

Korea rejoiced over gold while Canada, which thought it would win bronze, was in disbelief over its disqualification for impeding.

“I thought we had it,” Canadian skater Marianne St-Gelais said after the race.

China experienced deja vu as this was the second time they reached the finish line second in the 3,000-meter but was disqualified for impeding. The first was at the 2006 Turin Olympics, where Korea took home gold.

China was thought to have interfered with Choi in the last two laps of the race, when Choi slightly lost balance after physical contact with a Chinese short tracker.

As both Canada and China were disqualified, the Netherlands, which competed in the Final B, was bumped up to bronze. But despite competing in the lower group, the Netherlands raced well, setting a new world and Olympic record, clocking 4 minutes and 03.471 seconds.

With the addition of the bronze medal, Dutch skater Jorien ter Mors also made history by becoming the first woman to medal in two different Olympic sports at the same Winter Games. The skater had won gold for the women’s speed-skating 1,000-meter last week.

“I learned a lot about relay racing from my seniors in Sochi,” Shim said. “I was able to gain know-how from teammates here. That made another gold medal possible.”

Prior to the relay, three members on the team - Shim, Choi and Kim - each finished first in their 1,000-meter heats. The Korean men’s short-track team cruised through the 500-meter heats, finishing first.