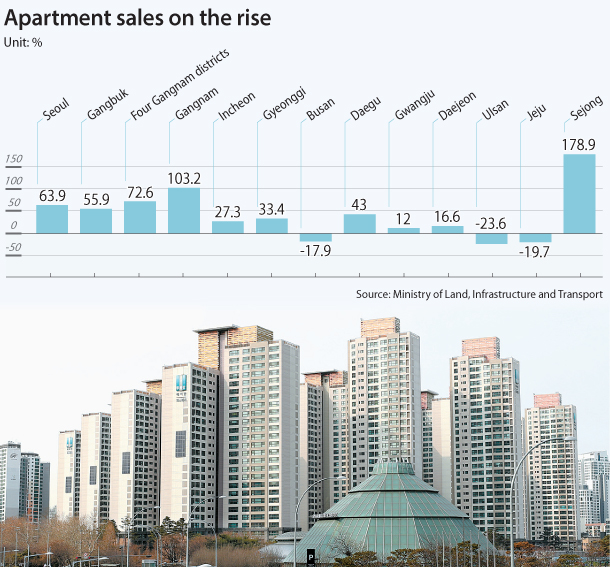 Despite the Moon Jae-in administration’s attempts to curb the overheated real estate market, transactions in Seoul have surged up sharply compared to a year ago.

According to the Ministry of Land, Infrastructure and Transport on Tuesday, 15,107 apartments changed hands in Seoul in January, a 63.9 percent increase compared to a year ago. This was far more than the national increase of 20.2 percent and a stark contrast to other regions that are not in the greater Seoul area, which only inched up 1.6 percent year-on-year.

The sharp rise in sales in Seoul was largely driven by the notorious four Gangnam districts - Gangnam, Seocho, Songpa and Gangdong - that spiked 103.2 percent, indicating that there is still significant demand for the posh neighborhoods whose value has been rising faster than any other region in the country.

Gyeonggi and Incheon saw lower growth at 33.4 percent and 27.3 percent. The only region outside of Seoul that saw a dramatic increase in apartment sales last month was Sejong, where most leading government departments from the Ministry of Strategy and Finance, the Ministry of Trade, Industry and Energy and the Fair Trade Commission are located. Sejong saw a 178.9 percent increase in transactions.

Jeju Island, generally a popular real estate hotspot, declined 19.7 percent while Busan dropped 17.9 percent. Ulsan tumbled 23.6 percent, the sharpest drop among major cities and provinces, indicating that the city continues to suffer from the aftermath of the restructuring of its main industry - shipping and shipbuilding.

The Moon Jae-in administration has introduced a range of polices targeted at curbing what it considers a speculative real estate market including tightening restrictions on loans and raising taxes on multiple home owners.

But since late 2017, the real estate market has defied these measures, especially driven by the popular Gangnam districts, which are not only high in value, making it a lucrative investment, but also high in demand due to the highly sought-after schools and academies in the area.

Currently the government is looking into raising property taxes including a comprehensive real estate tax.

One possible measure is to raise the government assessed value, which is used in taxing real estate holdings. A higher assessed value means higher taxes.