Exo thrilled to be a part of PyeongChang closing

Exo thrilled to be a part of PyeongChang closing 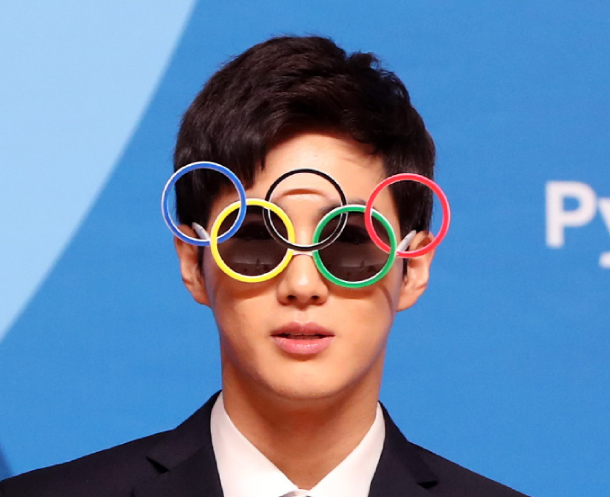 Suho, leader of K-pop group Exo, appears in front of reporters wearing sunglasses made of the five-ringed Olympic symbol at the PyeongChang Olympic Main Press Centre at the Alpensia Resort in PyeongChang on Wednesday. [YONHAP]

PYEONGCHANG, Gangwon - Members of K-pop group Exo said Wednesday they were thrilled to perform in front of what may be their biggest audience to date - at the closing ceremony of the PyeongChang Winter Olympics in Gangwon this weekend.

“None of us Exo members existed in 1988. I truly can’t believe that we’re a part of the closing ceremony of the 2018 PyeongChang Olympics,” Suho, leader of the nine-member band, said at a press conference at the PyeongChang Olympic Main Press Centre at the Alpensia Resort in PyeongChang.

Exo, along with Korean hip-hop singer CL, will grace the closing event at the PyeongChang Olympic Stadium on Sunday evening. “We’re excited to put on an awesome show this Sunday,” fellow member Baekhyun said.

The members said they were honored to be a part of Olympic history.

“When watching past Olympic opening and closing ceremonies, I always thought being on such stage was an incredible feat in and of itself. Emotions are running high knowing that Exo will be on stage,” he said.

While the Olympic opening ceremonies tend to mostly focus on specific themes and messages, the closing events lean more towards having a festival or party atmosphere, with pop stars often being at the center. The closing of the 2010 Vancouver Winter Olympics featured Canadian pop singers Alanis Morissette and Avril Lavigne, while the 2012 London Olympics had the Spice Girls and rock band Oasis put on shows at its closing.

When first approached, the singers said they were made nervous by the idea of performing to a global audience. The group has been putting extra effort toward the concert, which is being kept under tight wraps.

“[In the past] we prepared a lot for year-end award shows, but we knew that we had to prepare more than for the award shows,” Baekhyun said. “It’s an honorable occasion but we did go into it feeling the pressure.”

“Yun Sung-bin has shown an incredible performance in the skeleton event and he also wore the Iron Man helmet. I also like Iron Man, so there seems to be some connection between us,” said Suho.