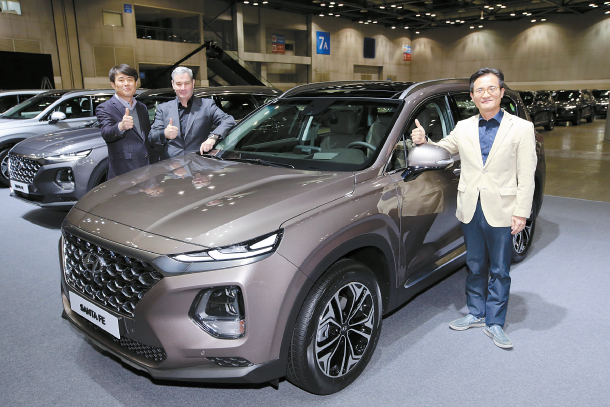 Hyundai Motor’s new Santa Fe, which was launched nationwide Wednesday, is bigger and more cost-effective than the three previous iterations of the car.

The nation’s largest automaker’s fourth Santa Fe SUV in six years is 70 millimeters (2.75 inches) longer than the previous version and 10 millimeters wider, with a wheelbase that is 65 millimeters longer.

“With a longer wheelbase and shorter overhangs, long hood and arching roofline ... it completes a confident and muscular stance,” he added.

The car has sharp daytime running lights and a new look that aligns it with other models in Hyundai Motor’s SUV lineup, such as the Kona and Nexo.

Hyundai Motor said the Santa Fe is equipped with the latest connected technology.

The fourth-generation Santa Fe is able to read text messages, write notes and activate the navigation system from voice commands.

All trims of Santa Fe will be equipped with a basic advanced driver assistance system.

Premium safety options include safe exit assist - which warns a passenger of any approaching vehicles when getting out of the car - and a rear occupant alert, which sends an alarm to the driver whenever there is a passenger, such as a baby, in the back seat. These features debut in the Santa Fe.

Santa Fe is one of the top-selling models for Hyundai Motor.

Since the company started accepting orders on Feb. 7, nearly 15,000 customers have ordered Santa Fes. According to Hyundai Motor, 50.3 percent of the people who ordered the car were in their 30s and 40s.

Hyundai Motor hopes to sell 90,000 units of the new Santa Fe per year in Korea.