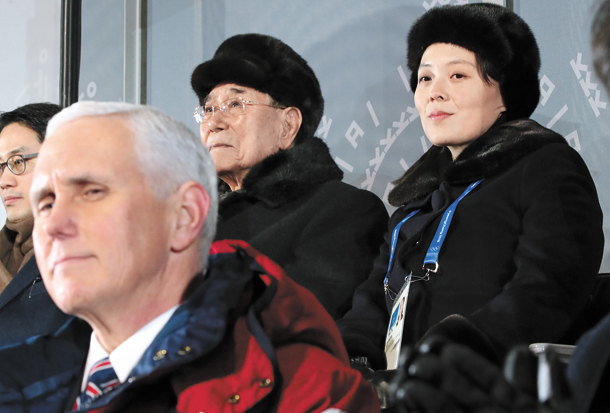 U.S. Vice President Mike Pence, front, views the opening ceremony of the PyeongChang Olympics in Gangwon, with Kim Yo-jong, sister of the North Korean leader, and the regime’s nominal head of state Kim Yong-nam behind him, on Feb. 9. [YONHAP]

The Blue House declined to confirm a media report Wednesday that it mediated a meeting between U.S. Vice President Mike Pence and Kim Yo-jong, sister of North Korean leader Kim Jong-un, after the opening ceremony of the Olympics, which collapsed after the North Koreans pulled out at the last minute.

“There is nothing I can confirm right now,” Presidential Chief of Staff Im Jong-seok said before lawmakers on Wednesday after he was asked about a Washington Post report that Pence was set to meet with Kim and nominal head of state Kim Yong-nam on Feb. 10, but the North canceled the meeting just two hours before it was supposed to begin.

At a hearing of the House Steering Committee of the National Assembly, Im said the Blue House couldn’t comment. “Please understand that I cannot tell everything about the ongoing talks between the two Koreas and close cooperation between South Korea and the United States,” he said. “Right now, there are not many things on the report that I can comment on.”

Earlier in the morning, presidential spokesman Kim Eui-kyeom also refused to discuss the report. “We have no official comment,” he said.

According to the report, the vice president’s office said that the North expressed dissatisfaction with Pence’s announcement of new sanctions as well as his meeting with North Korean defectors when it canceled the meeting.

Earlier this month, Pence took a five-day trip to Japan and Korea, including attending the opening ceremony of the PyeongChang Winter Olympics. In Japan, he warned that the United States would unveil the toughest, most aggressive economic sanctions against the North. In South Korea, he met with North Korean defectors and condemned Pyongyang’s rights abuses.

“North Korea dangled a meeting in hopes of the vice president softening his message, which would have ceded the world stage for their propaganda during the Olympics,” Nick Ayers, the vice president’s chief of staff, was quoted as saying by the Washington Post.

According to the report, the plan for Pence’s meeting with the North Korean leaders began to take shape before he departed for Asia. No details, however, were set until he arrived in Seoul on Feb. 8, the report said.

The Central Intelligence Agency got the word that the North Koreans wanted to meet with Pence, the report said. The initiative for the meeting came from South Korea, which acted as intermediary to set up the meeting, the report also said.

The U.S. and North Korea agreed that the meeting would take place at the Blue House early in the afternoon of Feb. 10 and no South Korean officials were scheduled to attend, according to the report.

While the Blue House remains silent on the report, a senior presidential aide told the JoongAng Ilbo that the North appeared to have seen no merit in meeting Pence. “Pence continuously issued stern messages on the North before and during his visit, and the North probably felt burdened,” the source said. “The North appeared to conclude that there is no gain by contacting the United States at this point.”

Other government sources said Seoul had been aware that Kim Yo-jong was a member of the North Korean delegation before Pyongyang made the official announcement. The North formally informed the South on Feb. 7 about her trip.

“We had agreed to offer the venue for the North-U.S. contact,” said a government official. “How can we not know about it?”

“It is my understanding that Seoul brokered the contact,” another official said.

It appears that the North-U.S. contact was supposed to follow the North Korean delegates’ meeting with South Korean President Moon Jae-in. On the morning of Feb. 10, Moon had a discussion with Kim Yo-jong, Kim Young-nam and other senior delegates and hosted a luncheon.

On the previous day, Pence chose to ignore the North Korean visitors. Attending a VIP reception before the opening ceremony of the Olympics, he exchanged pleasantries with many guests but not Kim Yong-nam. Later in the evening, in a VIP box for the opening ceremony, Pence strenuously avoided any contact with Kim Yong-nam and Kim Yo-jong, who sat behind him.

“I didn’t avoid the dictator’s sister, but I did ignore her,” Pence later told the Axios news website. “I didn’t believe it was proper for the U.S.A. to give her any attention in that forum.”

According to the Washington Post, the North Koreans told Pence’s team on the morning of Feb. 10 that the meeting was still on, but they were not happy with his rhetoric. And less than two hours before the meeting, the North canceled it.