Me Too accusations snowball among the arts

Me Too accusations snowball among the arts 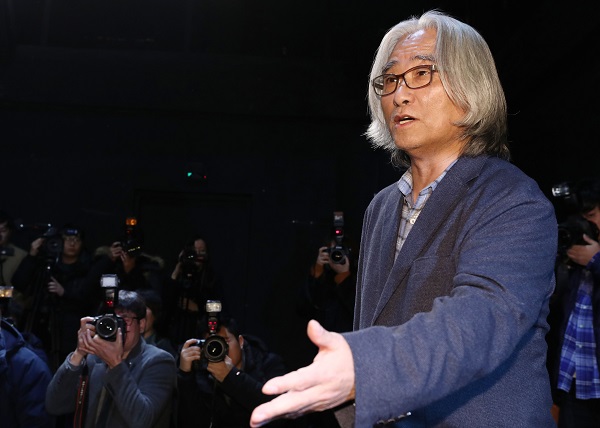 Oh Dong-sik, a member of the Street Theatre Troupe, said that prominent playwright and theatrical director Lee Youn-taek raped a female actor, two days after Lee denied the accusation at a press conference.

Oh said in a post on social media Wednesday that Lee’s display of contrition Monday for asking actors to give him intimate massages was rehearsed. Lee, the founder of the Street Theatre Troupe (called Yeonhuidan Geolipae in Korean), even practiced sad facial expressions prior to Monday’s press conference, Oh wrote.

At the press conference, Lee was asked by local media if he was guilty of a rape that led to an abortion, and said no. Those were lies, Oh wrote.

After Monday’s press conference, actor Kim So-hee said online that she was raped by Lee and terminated the pregnancy that resulted.

“The teacher isn’t someone I [used to] trust. He is a monster,” Oh wrote.

The Troupe, which Lee ran as director since 1986, was disbanded Monday.

Lee was accused of asking female actors to massage him, which sometimes led to sex acts. On Feb. 14, actor Kim Ji-hyeon posted on social media an account of how Lee asked her for an intimate massage, and that led to more revelations from other women.

After Monday’s press conference, he was condemned for not apologizing to the victims sincerely, as he said he wasn’t physically violent and didn’t admit to sexual assault.

When members of the Street Theatre Troupe gathered to talk about how to respond to the situation a few days ago, Lee asked lawyers, “What’s the legal penalty for this?”

In meetings over the past few days, the discussion was focused on how to keep the theater company going rather than support the victims, Oh wrote. It was even suggested that Lee put someone in the director’s position to take the heat off the company.

Lee has not yet responded to the new accusations.

More men in the theater are being accused of misconduct.

Director Hwang I-seon wrote online that she was appointed vice president of a community of students majoring in play writing at the Seoul Institute of the Arts after she started studying there in 2002, and was assigned to assist a professor who also ran a theater team. At gatherings for meal or drinks, she recalled, the professor touched her hand, arm and thigh.

She seemed to be accusing director Oh Tae-seok of the Mokhwa Repertory Company. Since Hwang’s post online, other actors have made accusations against Oh online.

Oh, whose production of “The Tempest” was running until yesterday at Namsan Gugakdang in central Seoul, has not responded. An official from the theater said Oh stopped coming since Tuesday.

Actor Jo Min-ki, a teacher at Cheongju University who has appeared in many TV dramas and films, was accused of sexually harassing his students. Some students notified the school about Jo’s inappropriate actions last year.

Actor Song Ha-neul said on her social media account that she was harassed by Jo in college, as were many of her friends who studied with him.

She decided to go public after seeing Jo deny the allegations against him, saying he did nothing “embarrassing.” The university recently removed Jo from his teaching position after an investigation.

“I’m not an idiot who doesn’t know the difference between encouragement and [sexual] harassment,” Song wrote, adding that Jo’s behavior was notorious among acting students. “Jo was an absolute power so no one could [resist]. He is the king [at school] as he is not only a celebrity but also a successful actor.”

Jo had an apartment near the Cheongju University campus and often invited female students there after class, Song wrote. The female students tried not to go there alone, she wrote. After serving alcoholic drinks, he would force girls to lie down on his bed and put himself in the middle of them, she wrote.

Jo’s agency, Will Entertainment, said yesterday the actor will drop out of “Children of a Lesser God,” an OCN drama that was set to begin broadcasting on Saturday. It said Jo will cooperate with any police investigation.

Writers accused of sexual misconduct are also in the spotlight, including poet Ko Un, a perennial Korean candidate for the Nobel Prize in Literature. His poems have been included in school textbooks, but could be yanked.

The Ministry of Education is reviewing whether to advise changes in textbooks, according to the JoongAng Ilbo. It is checking which publishing company has included Ko’s poems in textbooks.

The Seoul Metropolitan Government is also discussing what to do with a library decorated with illustrations of Ko’s “Ten Thousand Lives,” known in Korean as “Maninbo.” The library in central Seoul was decorated as a tribute to both Ko and to commemorate next year’s 100th anniversary of the March 1st Movement against Japanese colonial rule.

Ko, who has been a professor at Dankook University, told the school Monday that he will resign from the post.

The Ministry of Culture, Sports and Tourism said in a release earlier this week that it will pay more attention to issues regarding sexual harassment. It said it will hold a meeting with cultural industry officials as well as experts specializing in gender equality next week to discuss what to do. It will also set up more consulting centers next month so that actors, artists and others working in the cultural industry can get help.