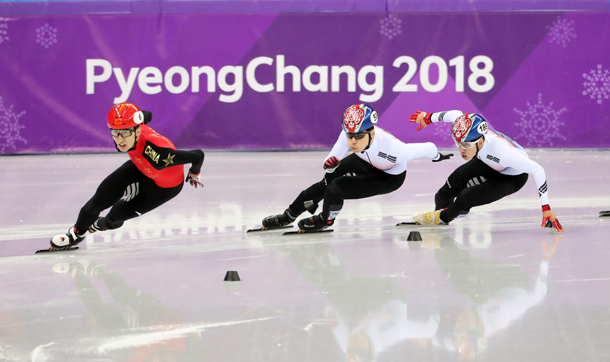 Hwang Dae-heon, second from left, and Lim Hyo-jun race in the men's 500 meters final at Gangneung Ice Arena in Gangwon on Thursday. [YONHAP]

Korea hoped to sweep the medals in all three short-track races on Thursday, but instead had to go home with just a silver and bronze from the men’s 500 meters at Gangneung Ice Area in Gangwon.

The short-track team got off to a good start, winning a silver and bronze in the 500 meters at the beginning of the night. Hwang Dae-heon won silver, clocking 39.854 seconds, while Lim Hyo-jun won bronze, clocking 39.919. Wu Dajing of China won gold with a time of 39.585, setting a new world and Olympic record.

Unfortunately, Korea’s luck ran out after the 500 meters.

Although the Korean team expected to pick up at least one medal in the women’s 1,000 meters, traditionally one of their strongest events, the race ended in disaster. Choi Min-jeong and Shim Suk-hee crashed out of the race in the final lap, losing their chance at a spot on the podium in the same event that Korea won both gold and silver in at the 2014 Sochi Olympics.

While there were high hopes that the team would be redeemed in the men’s 5,000-meter relay, the Korean team once again crashed out after Lim fell in the middle of the race. Although they finished the race, Korea had fallen more than a lap behind by the end, clocking 6 minutes and 42.118 seconds.

Hungary won its first gold ever in the men’s relay, setting a new Olympic record of 6 minutes and 31.971 seconds. China won silver and Canada won bronze.