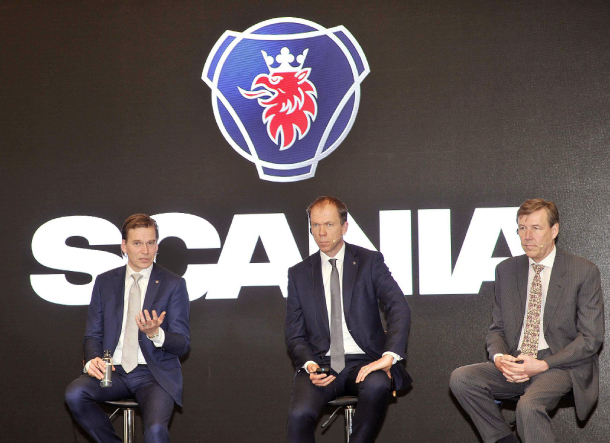 “There’s a saying that if you can manage Korean standards, you can manage any country standards [in Asia],” said Kaj Farm, the managing director of Scania Korea at a press conference held Thursday in Gangnam, southern Seoul.

Executive Vice Presidents Mathias Carlbaum, head of commercial operations, and Christian Levin, head of sales and marketing, joined the event to share the company’s future plans. This was the first time top-level executives from headquarters attended a local press event for Scania.

The company says Korea is an effective gateway for launching new models before they are sent to other Asian countries, as environmental regulations and safety standards are much stricter. Another advantage is that Korea has an information technology infrastructure that allows the company to test high-tech “connectivity” features that help the company collect data on drivers and their trucks on the road.

The company chose Korea as the first Asian market to sell its newest lineup, the All New Scania series, launched Feb. 10. The series was its biggest R&D project ever, taking 10 years and 2 billion euros to develop.

In sales, Korea was Scania’s biggest market in Asia before last year, when China overtook it. In Korea, Scania has an 11.5 percent market share in heavy trucks, a jump from 6.6 percent in 2013. The Korean office’s aim is to keep up slow but steady growth by expanding market share 1 percent each year.

Scania is pushing R&D to prepare for an era of sustainable transportation with increased energy efficiency, alternative fuels, electrification and so-called “smart transport.” It has already had some success in developing engines for alternative fuels.

One interesting experiment Scania is conducting in Singapore for the “smart” sector is “platooning,” where four trucks, operating between several freight terminals, drive in a convoy and the only manned vehicle is the one at the very front. The others are connected via Wi-Fi and are led by the car in front.

“Our target [for the Asian market] is a 70 percent increase [in the number of units sold] from 2016 to 2020,” said Carlbaum, Scania’s commercial operations head. “By then, one third of the total volume for the company will come from Asia. And, in the meanwhile, Korea will remain a core part of this growth strategy.”