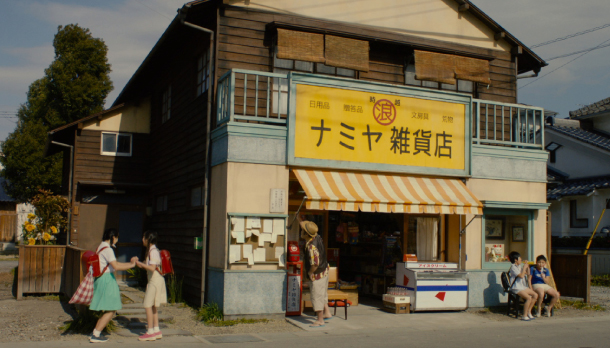 “The Miracles of the Namiya General Store” is an adaptation of author Keigo Higashino’s bestselling novel. [ISU C&E]

Bestselling author Keigo Higashino’s novel, “The Miracles of the Namiya General Store” was a huge sensation in Japan upon its release in 2012. The book’s popularity soon spread worldwide, including to Korea and China, leading to the book’s international total sales volume to 12 million.

Backed by the popularity, the tale was made into a film in Japan, which is slated to be unveiled to Korean audiences next week.

Directed by Ryuichi Hiroki of “Yellow Elephant” (2013), it is a nostalgia-heavy tale that takes a dive into Japan’s not-so-distant past with a message that encourages dreamers to dream on with what they want to pursue in life.

Centering on three childhood friends who are all orphans, the film starts with them breaking into an abandoned general store. While staying in the shop, the three teens discover a means to communicate with strangers from the 1980s through letters. 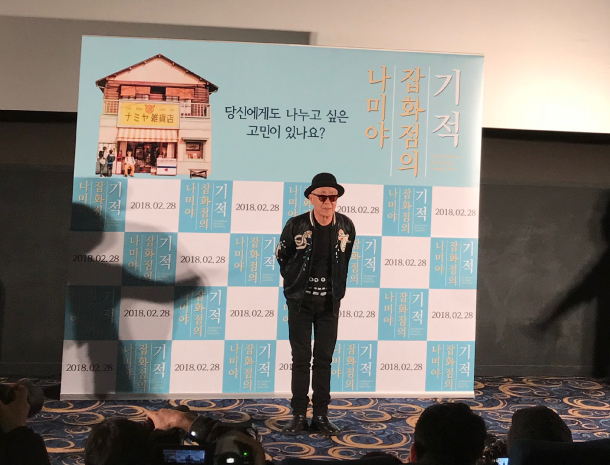 Director Ryuichi Hiroki of “The Miracles of the Namiya General Store” poses before the press during his visit to Seoul. [JIN MIN-JI]

The film jumps back and forth in time, following each of the letter writers who confess their daily struggles and seek advice.

“Lots of [unpleasant] social events are occurring, and I hope people who wish to heal their minds through a movie can feel that through ‘Namiya,’” said the film director, who attended press event in Seoul on Thursday.

Regarding the reason he sat behind the director’s chair, Hiroki explained, “I decided to work on the movie because I wanted to challenge myself with the fantasy genre, which I had never tried. In fantasy movies, anything, [regardless of how implausible], can be accepted. But although [‘Namiya’] is a fantasy flick, I tried to make it seem more realistic than reality-based movies.”

Due to the high anticipation set by the novel’s popularity and its complicated story development, it was not easy for the filmmaker to summarize the tale for the big screens.

“Combining many different episodes into a single film was definitely not easy. In fact, Higashino himself said that of all his novels, ‘Namiya’ would be the most challenging to make into a film. But instead of feeling pressured, the challenge made me feel more determined to work on the movie,” said the director.

The upcoming film, which stars Yamada Ryosuke and Toshiyuki Nishida, will arrive in local theaters on Wednesday.