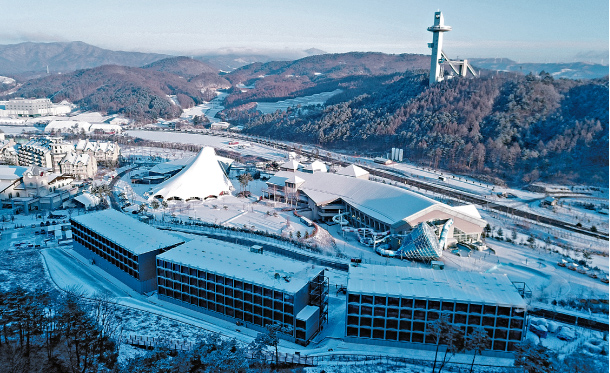 The Media Residence Center is an accommodation for international reporters during the Winter Olympics and was built using Posco products. [POSCO]

Posco is helping to ensure the success of the 2018 PyeongChang Winter Olympics through its strengths as a steel company.

On April 4th, 2016, Posco signed a sponsorship agreement with the Olympic Committee and offered it support for all things steel.

Posco released an ad campaign on Dec. 15, 2017, which noted that steel is used in 20 of the 21 events at the Winter Olympics, showing how involved they have been in the preparations for the international event.

For the commercial, Posco filmed biathlon and freestyle ski events at the Stelvio Pass in the Alps for its magnificent views.

Posco released a commercial to promote the opening of the Olympics and Paralympics. [POSCO]

The company also made a large ice rink at a studio in Namyangju, Gyeonggi, to film figure skaters, speed skaters, bobsledders and para ice hockey players.

Posco’s world-class steel products and solutions are applied to Olympic major facilities and have enhanced the infrastructure of the Winter Olympics. Posco used artistic and eco-friendly effects as wells as surface quality and reuse advantages.

At the 2018 PyeongChang Winter Olympics and Paralympics, Posco is looking forward to bringing world-premium products and solutions together to develop residential and industrial package solutions.

The newly designed sled was firm, light and shockproof. The Korean National Para Ice Hockey Team went on to win bronze at the World Championship in April 2017.

The film, “Parallel (We Ride Sleds)” will be released on the same day as the opening ceremony of the Paralympic Games on March 9.

The documentary is about the sweat and passion of the Korean National Para Ice Hockey Team who won the silver medal at the World Ice Hockey Championships in Harmar, Norway in 2012.

The film delivers moments of joy and pain. The director Kim Kyung-man had actually filmed 30 hockey games for three years and the documentary features moments from the team’s games over the years.

“Posco will actively support various cultural activities to contribute to the revitalization of the arts and unpopular sports.” said Kwon Oh-joon, CEO of Posco.

Posco also selected a 160-member cheering squad including executives and their families to attend the 5000-meter men’s speed skating race held at Gangneung Oval in Gangwon on Feb. 11.

They were selected by applying through the company and were randomly chosen. Two to four tickets were provided to each of the selected executives and as well as a shuttle bus, a lunch box and cheering supplies.

As an official partner of the 2018 PyeongChang Winter Olympics, Posco is providing full support to ensure a successful Olympics.