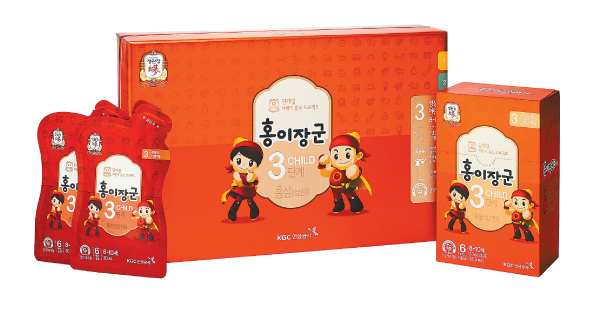 Hong Yi Jang Goon is the most popular red ginseng product for kids in Korea and has become a must-have item. [KOREA GINSENG CORPORATION]

While traveling abroad, there are always must-buy items in each country. Just like manuka honey from New Zealand, tea from China and leather from Italy, Korea has red ginseng.

Red ginseng sales in Korea are among the highest in the world and it is Korean’s most preferred health product for its diverse effects including relieving fatigue, boosting immunity and increasing blood circulation.

All Koreans are well aware of red ginseng and most have eaten it at some point in their lives. Parents especially purchase red ginseng products for their children, because it helps boost immunity and accelerates brain growth.

In Korea, red ginseng for children has been popular, and recently, the product has also drawn the interest of foreigners from around the world, especially in duty-free shops. Many of those who travel from Asian countries believe children’s red ginseng is a must-buy product in Korea.

According to the Korea Ginseng Corporation (KGC), the rate of foreigners purchasing Cheong Kwan Jang’s Hong Yi Jang Goon, or Korean Red Ginseng Kids Tonic, in duty-free shops increased from 10 percent to 30 percent over the past year. Red ginseng brand Cheong Kwan Jang occupies 70 percent of Korea’s red ginseng market. Hong Yi Jang Goon is the best children’s red ginseng in Korea. It was first produced in 2004 and has improved the health of many children for the past 14 years.

The product includes six-year-old red ginseng as its main ingredient, as well as deer antlers and the herb dong quai.

Other ingredients that improve children’s growth, immunity and physical strength are also included.

Hong Yi Jang Goon is mostly known for using six-year-old red ginseng from soil that has been managed for over seven years through Cheong Kwan Jang’s unique 100 percent contract cultivation and has undergone 290 stability tests a total of seven times.

“More visitors are purchasing children’s red ginseng in Korea. Now red ginseng is becoming known as a must-have item from Korea,” said an official from KGC.