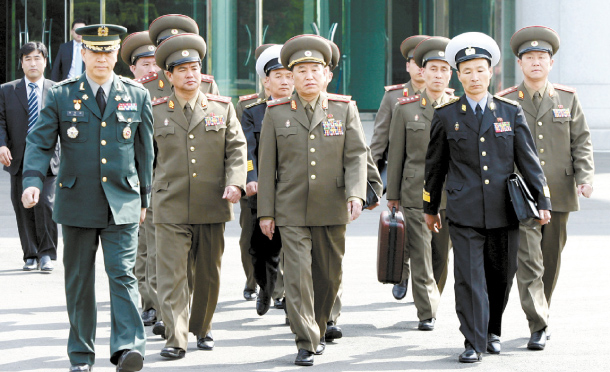 Kim Yong-chol, front row center, vice chairman of North Korea’s Central Committee of the Workers’ Party and former head of the army’s Reconnaissance General Bureau, at the border village of Panmunjom in March 2006 for talks with South Korea. [YONHAP]

Pyongyang told Seoul Thursday that it would send its second high-level delegation to the PyeongChang Winter Olympics to participate in the closing ceremony Sunday and it will be led by the figure blamed by past administrations for masterminding the 2010 torpedoing of South Korea’s Cheonan warship, killing 46 sailors.

Kim Yong-chol, a vice chairman of the North’s Central Committee of the Workers’ Party, will lead an eight-member delegation to South Korea from Sunday through Tuesday, according to the South’s Ministry of Unification, which handles inter-Korean affairs.

Kim is also known to be director of the committee’s intelligence arm, the United Front Department.

The North faxed the news through a hotline in the border village of Panmunjom on Thursday, said the ministry.

Other members include Ri Son-gwon, chairman of the Committee of the Peaceful Reunification of the Country of the Democratic People’s Republic of Korea, a cabinet-level agency overlooking South-North relations, as well as six support staff.

The group plans to travel via a road linking the two countries along the west coast. The ministry said it concluded the delegates’ participation in the closing ceremony would help improve inter-Korean relations.

Seoul made no official mention of Kim’s reputation. But the administrations of both Lee Myung-bak - who was president at the time of the attack - and successor Park Geun-hye accused him of orchestrating the Cheonan attack.

At the time, Kim helmed the army’s Reconnaissance General Bureau. A senior Blue House official refused to blame him when asked by local reporters on Thursday during a background briefing.

Kim is blacklisted unilaterally by Seoul and Washington due to his links to the regime’s weapons development program. Seoul has decided to temporarily lift the ban for the upcoming visit and discuss that issue with the United States, said the Blue House source.

Two members of the delegation that attended the opening ceremony this month were also under sanctions.

Kim will meet President Moon Jae-in at least once during the closing ceremony on Sunday at 8 p.m. at the PyeongChang Olympic Stadium in Gangwon, said the official, and probably meet his South Korean counterpart as well, National Intelligence Service Director Suh Hoon.

North Korea has no plans to meet with the delegation from Washington led by Ivanka Trump, U.S. President Donald Trump’s daughter and adviser, Moon’s aide continued. Nor does the Blue House have any intention at the moment to try to facilitate a meeting.

The Trump delegation is scheduled to arrive today and leave Monday.