Woo given 2.5 years for his role in Park scandal

Woo given 2.5 years for his role in Park scandal 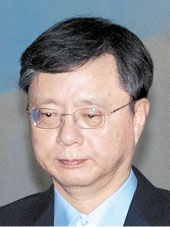 Woo Byung-woo, a former key aide of ousted President Park Geun-hye, was ordered Thursday to serve two years and six months in prison for having turned a blind eye to her corruption scandal and abusing his power while serving a powerful post in her Blue House.

The Seoul Central District Court convicted Woo, former senior secretary for civil affairs, for abuse of power and dereliction of duty. The court said Woo is guilty of obstructing a special inspector’s probe into his corruption allegations in July 2016. He was also convicted of overlooking the wrongdoings of Park’s friend Choi Soon-sil and An Chong-bum, former presidential aide.

“Because of your participation in the cover-up, the country’s chaos was worsened,” the court said in the ruling.

Since local media reported a corruption allegation involving Woo and his family in July 2016, numerous investigations have taken place on the former prosecutor, but he managed to avoid prosecution.

He was finally indicted in April 2017 on eight charges, including abuse of power and professional negligence, when Park was formally prosecuted by the special investigation team after her impeachment and subsequent removal from office.

The court also convicted Woo for abusing his power by pressuring officials at the Fair Trade Commission to make false accusations against CJ E&M, an entertainment arm of CJ Group, to prompt a prosecution’s investigation. During the Park presidency, CJ Group faced a series of oppressions for having made investments in liberal content.

Woo was also convicted of disobeying summons by a bipartisan special legislative committee that held a series of public hearings to grill on the presidential scandal.

The court, however, acquitted him of the charge that he had abused his power to demote seven public servants of the Culture and Sports Ministry.

In the closing argument last month, the prosecution asked the court to punish Woo with an eight-year sentence. Woo, at the time, argued that he is a victim of political retaliation. He also said he was just following then President Park’s orders.

Although an independent counsel and the prosecution each applied for a detention warrant against Woo last year, the court struck down both. He, however, was taken into custody on Dec. 15, when the prosecution filed a new warrant request with a new charge.