Crash-prone Korea have disappointing night at the races

Crash-prone Korea have disappointing night at the races 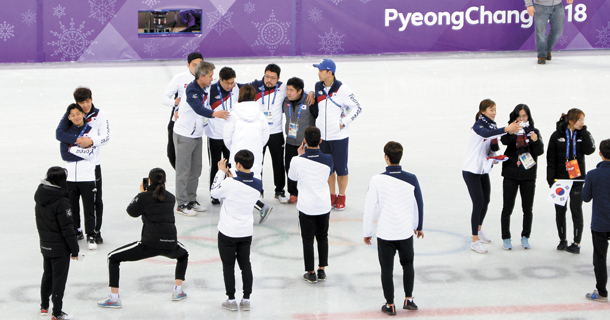 The players and coaching staff of the Korean men and women’s short-track team pose for pictures at the Gangneung Ice Arena in Gangwon on Thursday. [YONHAP]

Korea’s dream of sweeping the medals in all three short-track races on Thursday night was dramatically dashed after a series of crashes left Korea with just a silver and bronze from the men’s 500 meters at Gangneung Ice Arena in Gangwon.

The short-track team got off to a good start, winning a silver and bronze in the 500 meters at the beginning of the night. Hwang Dae-heon won silver, clocking 39.854 seconds, while Lim Hyo-jun won bronze, clocking 39.919. Wu Dajing of China won gold with a time of 39.585, setting a new world and Olympic record.

From left: Lim Hyo-jun, Seo Yi-ra, Shim Suk-hee and Choi Min-jeong all crashed out of races at the Gangneung Ice Arena in Gangwon on Thursday. [YONHAP]

But Korea’s slippery evening began even earlier, as Lim fell in men’s 500-meter semifinals, forcing a restart. While Lim was able to stay on his feet long enough to qualify for the final and take bronze, it was just the start of Korea’s misadventures in the Gangneung Ice Arena.

Although the Korean team expected to pick up at least one medal in the women’s 1,000 meters, traditionally one of their strongest events, the race ended in disaster. With two laps remaining in the race, Choi Min-jeong and Shim Suk-hee - the world No. 1 and 3 over 1,000 meters - started to speed up to try and take the lead. Unfortunately the two started to sprint at the same time, possibly a result of their joint training, causing them to crash out the race on the final lap.

“Our spurt point overlapped,” Shim said. “But I think we both tried our best until the end.”

Before the start of the PyeongChang Olympics, Shim, captain of the women’s short-track team, was a fan favorite. Shim is the only skater on the team at this year’s Games to win an individual medal at the 2014 Sochi Winter Olympics - she won gold, silver and bronze.

The addition of Choi, Korea’s top-ranked skater and the world No. 1 in all three short-track distances, left fans hoping for the national team’s best performance yet - perhaps even taking gold in all four events. Instead the women’s team finish their Olympics with just two medals, golds in the relay and 1,500 meters.

“Preparation for PyeongChang was harder than four years ago,” Shim said after the race. “Rather than thinking about the hardest time I had, it’s faster thinking about the time that wasn’t difficult. If I can go back, I want to go back to the 1,500-meter race.”

Although the number of medals the women’s team took home might be a disappointed - the team has managed to get at least three in the last five Olympics - the skaters said they have no regrets during a press conference held at the Gangneung Olympic Park on Friday.

“I’ve been training thinking that I’ll leave no regrets,” Kim A-lang said. “The Olympics allowed me to mature as a better skater.”

While there were high hopes that the team would be redeemed in the men’s 5,000-meter relay, the Korean team once again crashed out after Lim fell in the middle of the race. Kwak Yoon-gy rushed over to Lim to exchange skaters, but by that point Korea had fallen more than half a lap behind with still 22 laps to go.

Korea did everything they could to get back into the race, but ended up falling more than a lap behind by the end, clocking 6 minutes and 42.118 seconds. Korea hasn’t managed to win gold in the men’s short-track relay since the 2006 Turin Olympics. A silver at the 2010 Vancouver Games was their last medal.

“PyeongChang Olympics was the stage I wanted to be at and the stage I’ve dreamed of,” Lim said. “I wanted to win gold in the relay race more than the individual race. I’m very disappointed that we couldn’t smile all together at the end because of my mistake. I’ll work harder to not repeat the same mistake next time.”

Hungary won its first gold ever in the men’s relay, setting a new Olympic record of 6 minutes and 31.971 seconds. China won silver and Canada won bronze.

Though the men’s short-track team failed to medal in the relay, they had a far better Olympics than in Sochi, winning a gold, a silver and two bronze. The team is a very young team, as Kwak is the only skater with Olympic experience.

“We always talked about how we should accept the results we get and how we should focus on preparing for the Olympics the best we can,” head coach Kim Sun-tae said. “Our results may be disappointing at some part, but I’m satisfied.”