Between Washington and Beijing

Between Washington and Beijing 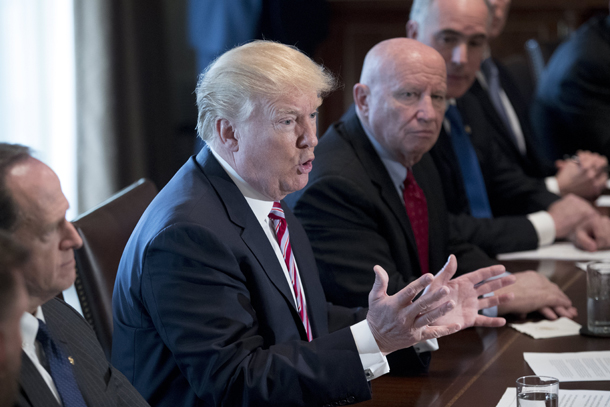 U.S. President Donald J. Trump speaks with members of Congress in a meeting on trade and the economy at the White House on Feb. 13. [YONHAP]

Seoul declared it will take the steep import tariffs on Korean washers and solar panels to the World Trade Organization (WTO) after U.S. President Donald Trump took the two Section 201 safeguard actions in January. I asked a senior trade official in the Moon Jae-in administration why Seoul had not taken such a decisive and immediate move when Beijing restricted Korean exports to China as retaliation for the country’s defying its warning on the deployment of a U.S. anti-missile system.

He explained the Chinese case was different. “You can never know how Beijing will react. It can become more vengeful. A WTO suit against Beijing can do more damage than good to national interests in the long run.

“But the United States is a country of systems and democratic procedures. No matter how tough Trump talks, he cannot move and act as he wishes. Seoul has a better chance against Washington at the WTO,” he said.

He more or less was admitting to the law of the fist. The conundrum is understandable, but export-reliant Korea nevertheless must not run its trade policy so whimsically.

Faced with another barrage of hefty import curbs on South Korean steel and aluminum from the United States, President Moon Jae-in told his economic and trade team to be “bold and aggressive” against Washington’s trade offensive.

He is not entirely wrong by insisting that commerce and security are different realms. Trump’s administration has been overly selfish, irrelevant and unreasonable in defending U.S. industries at the expense of foreign companies and economies. But the contradiction in trade policies with those two major trade partners is very perplexing and worrying for three reasons.

First of all, the timing is bad. Seoul suffered vicious retaliations from Beijing — ranging from banning Korean television programs from being aired to prohibiting group tours to come to South Korea to a forcible shutdown of Korean businesses in China — without making any complaint.

Moon and his administration should have shown the same brass before promising Beijing the so-called three noes — no additional Terminal High Altitude Area Defense (Thaad) battery deployment, no participation in the United States’ missile defense network and no establishment of a trilateral military alliance with the United States and Japan — during his state visit to Beijing. If the government at least took the matter to the WTO, it would not have invited criticism and questions about the differences in its policies towards Washington and Beijing.

Trump’s offensives were foreseen. He had warned of protectionist actions and singled out the free trade agreement (FTA) with South Korea as being a “very, very bad” deal and harmful to U.S. interests. When he met Kim Hyun-chong — the trade representative who had been the chief negotiator of the FTA pursued under former liberal president Roh Moo-hyun — in Seoul, Trump asked him if he was ready to get to work again.

Trump chose the harshest remedial choice among recommendations to curb Korean residential washers from the International Trade Commission. Washington has been consistent with Trump’s “America First” campaign slogan, so why is Seoul so startled and stumbling now?

It is unrealistic to separate trade and security issues. The Opium Wars in the 19th century were an invasion of China by Western powers because of its ban on the opium trade. Japan’s invasion of Ganghwa Island of Korea was triggered by the protectionist policy of the Joseon royal court.

Trump indicated the United States would use commercial means if Pyongyang tries to come between Seoul and Washington. If trade and security had been separate, Beijing would not have taken economic sanctions to react to a security decision over Thaad. How can our president insists that security and trade are separate issues?

What is really worrisome is that the president appears to be getting advice from a group of unqualified people. Whoever is advising Moon on economic issues cannot be an expert on trade and the economy. Otherwise, Moon could not have found fault with the legal framework of the FTA with the United States at such a critical juncture. There are no trade experts in the Blue House, which explains the poor moves on the trade front. Having seen Seoul yield so easily to Beijing’s bullying, Washington is hardly likely to treat Korea with respect.