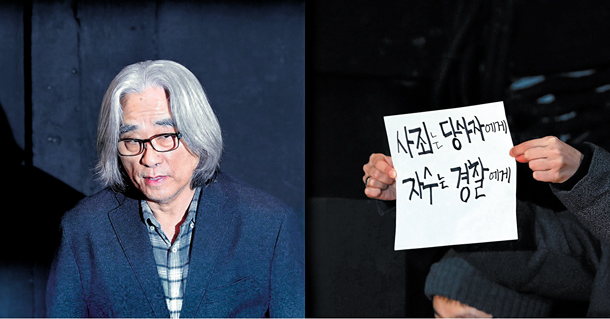 As 67-year-old playwright and theatrical director Lee Yoon-taek holds a press conference to apologize for his sexual misconduct with female co-workers, a citizen holds a sign that reads, “Apologize to the victims and turn yourself in to the police.” [KIM KYUNG-ROK]

Accidents happen at unexpected times and places. The fire at Severance Hospital in western Seoul on Feb. 3 was such a case. No one expected a fire at the food court of the major hospital in the early morning.

I was nervous as I dashed to the scene, but fortunately the situation was already calm by the time I arrived. The building houses hundreds of patients, but there were no casualty. What prevented further damage were “protective devices” used for emergency situations. Right after the fire broke out, sprinklers automatically extinguished the flames, and fire shutters blocked harmful smoke from spreading.

Lately, sexual violence has been exposed in cultural circles, academia and the media, and it is hard to know where and how these incidents will happen. Victims who suffered from these shocking assaults never expected them. Unlike the fire at Severance Hospital, the victims of sexual assault suffered due to a lack of proper protective devices.

The Korea Institute for Criminology’s survey of 1,150 office workers last year revealed the gravity of the situation. 54 percent of respondents who experienced sexual harassment said that they did not take action and left the incident unreported.

When asked why, three answers got the most responses. “Because of the relationship with the offender,” “Nothing will change even if I reported it” and “I would experience disadvantages at work.”

When protective devices don’t work properly, victims choose to be silent. In the meantime, offenders continue to offend. Some victims could only begin speaking up after widespread social attention from the “Me Too” movement became a protective device for them.

We cannot just blame the organizational culture or lack of systematic measures. We also failed to be a protective measure for the victims. Lee Seung-bi, who exposed playwright and theatrical director Lee Yoon-taek’s acts of sexual violence, said, “He was like a cult leader.” Insiders of the world of theater said that Lee’s behavior was an open secret.

Those in the theater, those who heard the stories of fellow students being sexually harassed by their professors and I, having questioned that, if a fellow reporter had really been sexually harassed, she would have reported it, missed the chance to become a protective device for the victims.

The latest “Me Too” movement should not remain the exposure of sexual violence but be a widespread reflection on our shameful indifference.

*The author is a national news reporter at the JoongAng Ilbo.